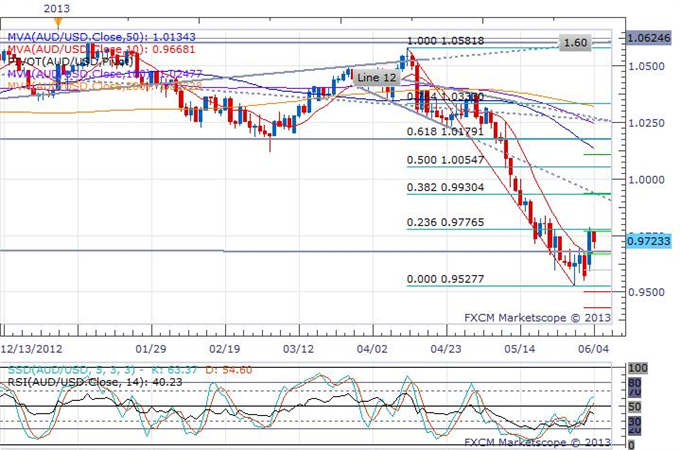 The Reserve Bank of Australia left the target interest rate at 2.75% in June, as was expected by a majority of Bloomberg surveyed analysts. The rate hold comes only a month after the RBA cut the target rate to a record low level. The RBA has cut the interest rate by 2.00 percentage points since November 2011.

The RBA said that monetary policy is appropriate for the time being, but inflation may provide scope for easing. The 2.5% inflation reported for Q1 was in line with the RBA’s 2% to 3% target rate. Following last month’s rate cut, the RBA said it had only used some of the scope of a rate cut, and the central bank said it cut rates to boost businesses weakened by the currency’s strength.

The RBA said that growth over the past year has been a bit below trend, as GDP expanded by 0.6% in Q4 of 2012. The GDP for Q1 will be released tomorrow, and the RBA recently cut its growth forecast to 2.5% for 2013. Relating to the Australian Dollar, the RBA said in this month’s meeting that the exchange rate remains high given the export price decline.

However, the Australian Dollar showed little reaction to the rate hold, as it met expectations. The Aussie continues to trade slightly above 97.00 against the US Dollar, and the pair may next see resistance at 0.9777, by the 23.6% retracement of the decline from April’s high to May’s low. Support may be provided by the 20 month low recently set at 0.9528.