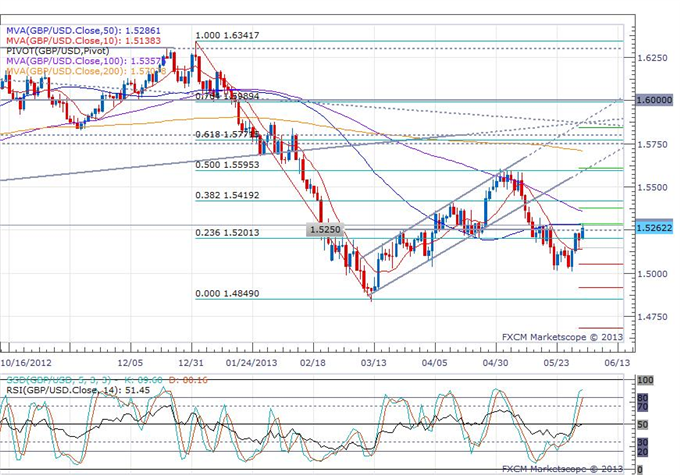 The UK Purchasing Managers’ Index for manufacturing rose to a fourteen month high, according to the Markit release. The PMI was reported at 51.3 in May, beating expectations for 50.3 and higher than April’s revised 50.2 manufacturing index result. A PMI reported above 50.0 indicates expansion in sector activity.

The domestic market was the main driver of new factory order inflows, but new export business also increased in May, according to Markit. The strongest manufacturing performance was seen by consumer goods producers. Job creation was surveyed in the manufacturing sector for the first time in four months.

Markit noted that the PMI points to a second quarter of economic expansion, following the 0.3% GDP growth seen in Q1. “Signs that the manufacturing sector is also recovering will add further weight to the Bank of England’s decision to wait-and-see before adding to its accommodative policy stance,” said Markit Senior Economist Rob Dobson. Signs of further economic growth are Pound positive, especially ahead of the BoE QE decision, as was pointed out earlier today on DailyFX.

Although the Pound gains seen immediately following the PMI release were quickly erased, GBP/USD is trading 0.38% higher in today’s trading and set a two week high just short of 1.5300 in Forex markets. The broken support line around 1.5280 may now continue to provide resistance, and the key 1.5000 level may provide support.