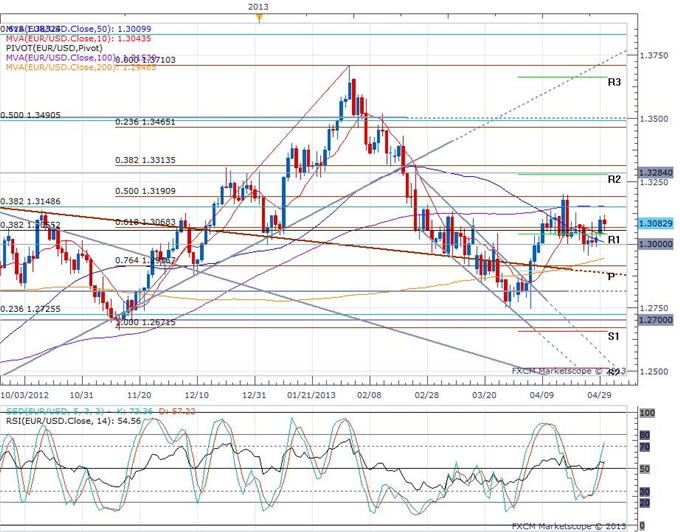 THE TAKEAWAY: Euro-zone inflation falls to a three-year low of 1.2% -> Unemployment at an all time high of 12.1% -> Euro rebounds despite data

Euro-zone annual inflation has declined to a three year low and further opened the door for a possible ECB rate cut, according to the first Consumer Price estimate by Eurostat. Annual inflation was reported at 1.2% in April, lower than an expected 1.6% inflation rate and down from 1.7% in March.

Food, alcohol and tobacco prices were estimated to have risen 2.9% since April 2012, while energy prices declined 0.4% annually. The final consumer price index result for April will be released on May 16.

Euro-zone unemployment (Mar) was reported at a new record high of 12.1% for March, meeting expectations and slightly higher than the 12.0% unemployment rate reported in February.

The ECB will announce interest rates for May on Thursday, and majority of analysts are expecting the central bank to lower interest rates to 0.50% from a current 0.75% interest rate. The lower than expected inflation rate allows the ECB to take further monetary action to support the struggling Euro-zone economy without pushing inflation above its target 2.0% target rate.

However, the Euro did not react significantly to the lower than expected inflation rate, and instead rebounded about twenty points from a session low against the US Dollar. Support may be provided at 1.3055, by the 38.2% Fibonacci retracement of the rally from the EUR/USD all time low to its all time how, and resistance may be provided by a two-month high at 1.3201.