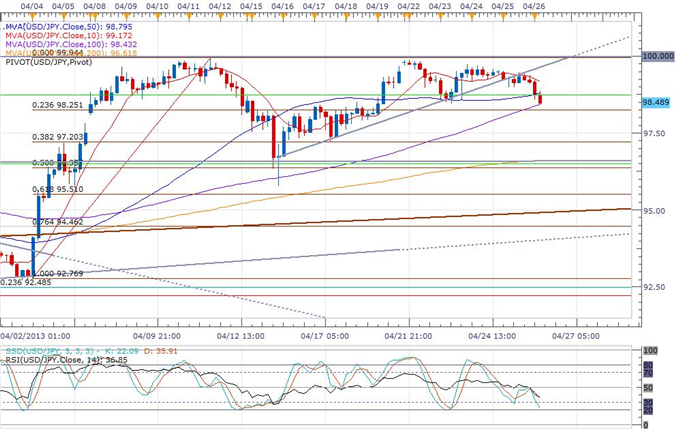 THE TAKEAWAY: BoJ repeats pledge to double its monetary base within two years -> Policy is unchanged, interest rate goes unmentioned -> Yen rises against the US Dollar

The Bank of Japan maintained a pledge to double its monetary base within 2-years, as was first announced following the previous central bank meeting at the beginning of the month. The BoJ further reiterated it will increase the monetary base by 60-70 trillion Yen a year.

The BoJ did not comment on the interest rate, which was left at 0.1% at the meeting at the beginning of April. The previous announcement to double monetary base followed Kuroda’s first meeting as the BoJ Governor, and the announcement showed the central banker’s commitment to PM Abe’s promise to reach 2% inflation within two years. Today’s announcement was unanimously agreed upon.

The Yen rose following the BoJ’s announcement, possibly due to disappointment for those who expected the BoJ to further increase monetary stimulus in today’s meeting. The previous announcement to double the monetary base surpassed market expectations and sent USD/JPY 700 points higher and just a few points short of the key 100.00 figure. The pair may continue to see resistance at 100.00, and support could come in at 98.25, by the 23.6% retracement of the rally following the April 4th decision.