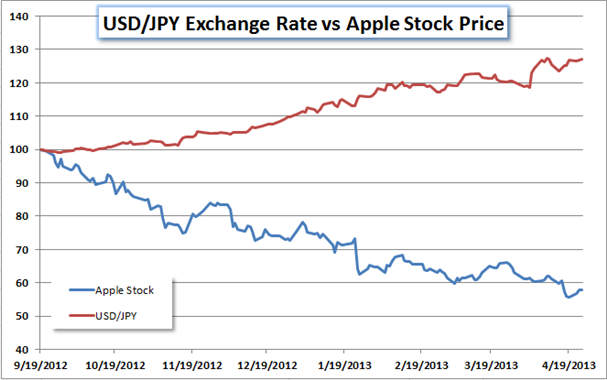 Few financial assets have been as highly publicized over the last several months as Apple stock, which has plummeted 42 percent since its high of $702 in September of last year. This free-fall has taken many equity investors by surprise, with their gains shrinking substantially or even disappearing altogether. Yet, not all Apple investors have suffered equally from the stock’s decline. While many American shareholders have seen their trading accounts dwindle with Apple’s fall, their Japanese counterparts have been provided some relief in the form of a depreciating Yen.

For Japanese investors, the Yen’s depreciation against the dollar, thanks in large part to Japan’s new focus on “Abenomics”, has in-part hedged Apple’s decline. Although these investors must share in the stock’s nominal decline, the real loss is smaller since the depreciation of the Japanese currency causes each dollar of Apple stock to be worth a greater number of Yen. For instance, on September 19th 2012, had a Japanese investor purchased a share of Apple stock, it would have cost them ¥55,030 given the USD/JPY rate of 78.38. Fast-forward to current prices and those same Apple shares are worth ¥40,877, assuming the current USD/JPY rate of 97.98. This results in a loss of ¥14,153 or approximately 26%. Meanwhile U.S. investors saw their Apple stock price decline from $702 per share to $417 a share, a loss of $285 or nearly 41%, significantly more than those investors in Japan.

It is important to remember that just as the appreciation of a foreign currency can help mitigate losses or increase gains in foreign equity investments, depreciation of a foreign currency can just as easily have the opposite effect. In the above example, had the Yen appreciated against the dollar, Japanese investors would have received less Yen for each dollar of Apple shares, thereby increasing their losses. The scenario charts below further highlight this point.

International investors need especially be concerned with foreign exchange fluctuations when holding international equities, which pay consistent dividends. Apple for instance, recently chose to increase its quarterly dividend by 15% from $2.65/share to $3.05/share. For Japanese investors the true value of this dividend payment fluctuates with the USDJPY rate.

Although this article has focused on the effect of Japanese investment in Apple equity, the same rules apply in any investment into international stocks. When trading on a foreign exchange, investors need to always be aware of the currency fluctuations which can directly increase (decrease) their gains and dividend payments. In order to hedge against these movements, investors should look into holding currency pairs which may offset the currency risk inherent in their equity position. A U.S. investor, for instance, who wishes to hold shares of Adidas, denominated in Euros, may wish to sell the EURUSD pair in case of a fall in Euro currency, which could substantially diminish any gains made on Adidas stock.