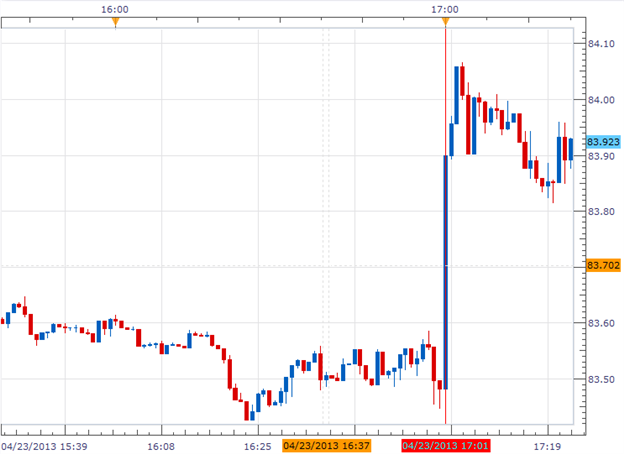 The New Zealand dollar rose against all counterparts as Reserve Bank of New Zealand (RBNZ) maintained the official cash rate (central bank rate) at 2.50 percent. The release is in line with analysts’ expectation. Moreover, RBNZ’s Governor Wheeler expects rate to be unchanged through the end of 2013.

RBNZ’s Governor Wheeler says the New Zealand Dollar is overvalued and home prices in certain regions show high inflation. The possibility of an overheated housing market has been a major concern to the RBNZ and continual rising house prices could serve as evidence for the RBNZ to raise its official cash rate to avert the burst of a housing bubble.

However, the reasoning for a rate change may not be as clear-cut as it seems. In fact, a rate hike may increase the attractiveness of its current high yield profile, and we may see the kiwi make another run to the upside that could hurt its tradable sector. Wheeler attributes the strong Kiwi to the aggressive asset purchasing program by the Bank of Japan (BoJ) as it bolsters risk appetite. Looking ahead, the New Zealand trade balance data that is set to release this Thursday will show whether china’s demand is likely to support the New Zealand economy.

On the domestic front, negative weight from the drought could drag the economy lower going forward as it is expected to lower farm output in the next season, according to Wheeler. Therefore, the combining factors have added more tension to the rate decision by the RBNZ. Market participants are expecting a slim 11 percent probability that the RBNZ will lift interest rate by 25 basis points in the next twelve month, according to Credit Suisse overnight index swap.

The expected rate decision sent the NZDJPY higher by 56 pips. Since the beginning of the year, risk appetite has bolstered the kiwi against most counterparts and the most versus the yen, in which the New Zealand dollar has advanced nearly 10 percent versus the yen over the past three months. At the time of writing, the NZD/JPY is trading at 83.86.