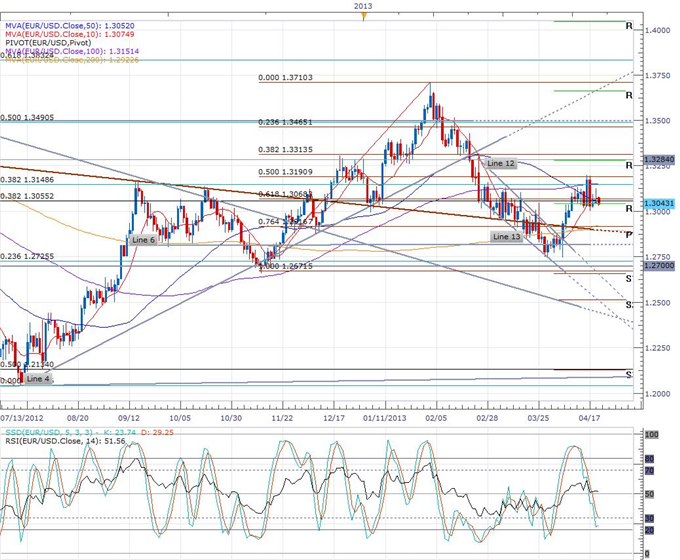 THE TAKEAWAY: Euro-zone composite PMI remains at 46.5 in April -> German services activity declines for the first time in five months -> EUR/USD falls below 1.30

The Euro declined below 1.3000 against the US Dollar following a contraction in German services activity for the first time in five months, according to Markit’s Purchasing Managers’ Index.

Following the 0.6% decline in Euro-zone GDP in Q4 of 2012, Markit reported that the PMI’s for Q1 show a 0.2%-0.3% economic contraction. Markit further said that the ongoing recession will continue into Q2 according to April’s PMI’s. “The survey is signaling a worrying weakness in the economy at the start of the second quarter, with signs that the downturn is more likely to intensify further in coming months rather than ease,” according to Markit Chief Economist Chris Williamson.

The sharp downturn in German PMI’s pulled the Euro about 80 points lower against the US Dollar, and the pair fell below 1.3000 for the first time in two weeks. The pair may next see support at 1.2917, by the 76.4% retracement of the rally from November’s low to February’s high. Resistance may now be provided by the key 1.3000 figure.