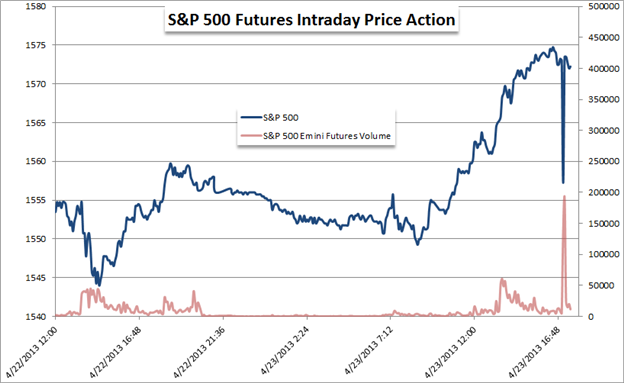 On Tuesday at approximately 1:00EST, the Associated Press twitter account (twitter.com/ap) sent out a tweet the read “Breaking: Two Explosions in the White House and Barack Obama is injured.” In a sign of how technology and access to information and data has changed the trading landscape, the news sent a shock of immediate volatility through the market. However, shortly after the dramatic news hit the ‘wires’, the account was suspended and the Associated Press verified that their account was hacked and that the message was erroneous.

Although the associated press was the only source of the false message, the scalability of news disseminated through a resource like Twitter and the AP’s remarkable following (1.9 million) ensured a serious market impact. In the chart below, we see dramatic impact with the S&P 500 futures dropping 14 points to 1562.50 within the three minutes of the message. And, shortly after the message was confirmed to be false, the S&P 500 and futures markets immediately regained all of its dramatic losses.

While the equity benchmark’s price may have returned to normal, there is nevertheless a lasting impact. We see the hit below in the graph of S&P 500 Emini futures price and volume. For the Emini contract (the most heavily traded derivative of the underlying), approximately $18 billion in value was traded. 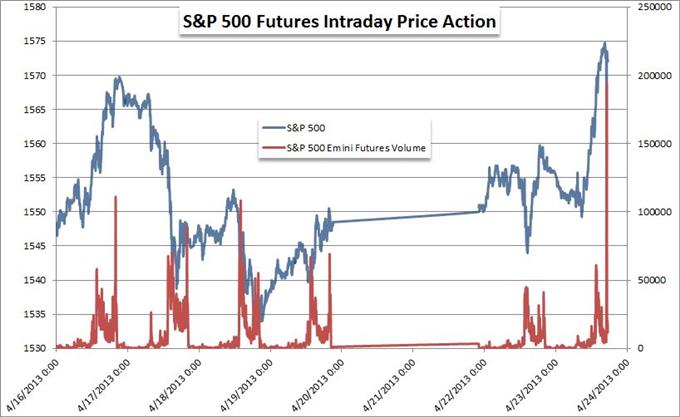 The ‘flash’ crash market reaction wasn’t just limited to the equities and futures market though. As we can see below, USDJPY had also plunged 75 pips in the minutes following the news and subsequently retraced the slide when it was confirmed to be a hoax. This is a reflection of the response to risk-based trends in the currency market. The yen crosses are sensitive due to their carry trade use as well as the precarious heights they have scaled due to the Bank of Japan’s (BoJ) stimulus effort.

For the USDJPY specifically, this connection may seem unusual as both currencies in the pair are considered safe havens. However, given the relative position of the two individual currencies against their respective counterparts, it is not much of a stretch to suggest that the yen is far more oversold than its more liquid counterpart. 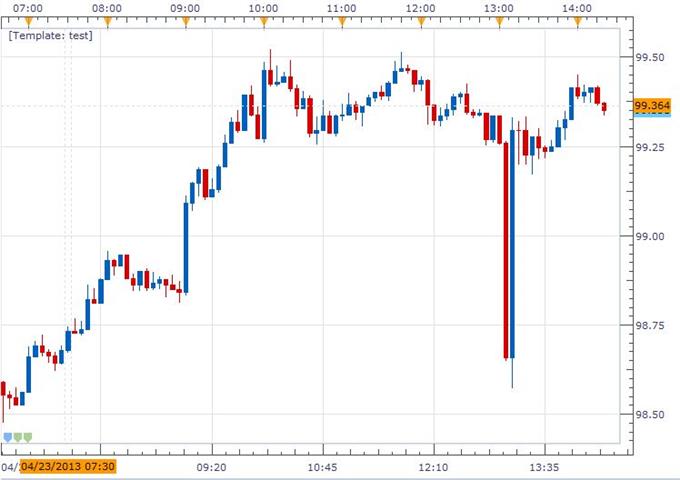 Market moves with the scale of scope and influence as the one we have seen with the AP’s update don’t occur very often. However, significant moves around normal and verifiable event risk and data does occur with regularity. To stay on top of news while it happens, it is important to prepare for known event risk (http://www.dailyfx.com/calendar) and to follow resources like Twitter to stay on top of breaking news.