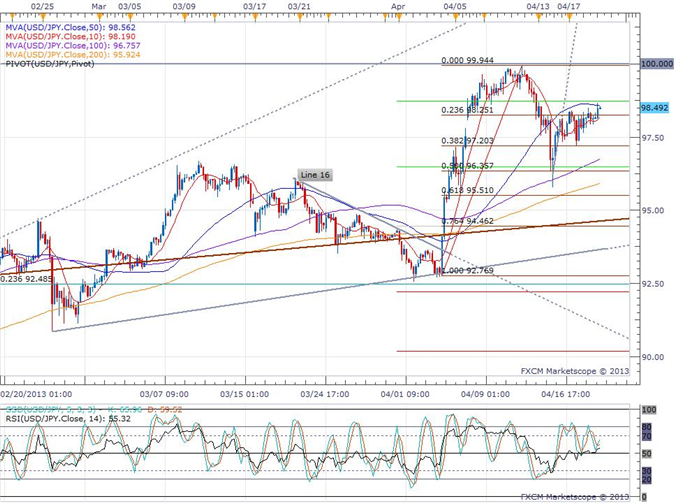 THE TAKEAWAY: Japanese Leading Index revised higher to 97.6 in February -> BoJ upgrades its assessment of the economy -> Yen trading steady

The Japan Leading Index reached a new five year high in February, according to a final revision by the Cabinet Office. The Leading Index was reported at 97.6, higher than a previous estimate of 97.5 and better than the 95.0 index result seen in January. The Coincident Index for February was revised slightly higher to a six month high of 92.4.

The leading index is intended to predict economic performance 6 to 9 months into the future based on a number of economic indicators. The index results fall on a 1 to 100 scale, and a result above 50 suggests improved economic activity.

The Japanese GDP failed to grow in Q4 from Q3 levels. The unchanged economic performance followed two quarters of declining GDP. Earlier this week, the BoJ upgraded its assessment of all 9 of the Japanese regions on an improved global economy and resilient domestic demand. Improved signs of Japanese economic growth are Yen positive.

However, the revision of the Leading Index had no significant effect on Yen trading in Forex markets. USD/JPY is trading around 98.50 at the time of this writing, and the pair may see resistance by a 4-year high recently set at 99.94.