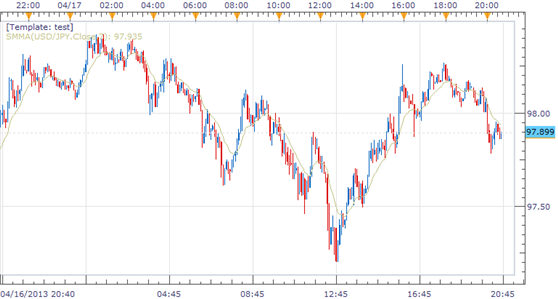 Japan's Trade Balance Improves and May Continue To Do So

Japan’s merchandise trade balance total came in at -¥362.4B for March, beating estimates of -¥522.2B as well as the February’s balance of -¥779.5B. Meanwhile, trade exports for March (YoY) grew at 1.1% versus estimates of 0.2% and February’s growth of -2.9%. Import growth remained positive, but fell to 5.5% from previous month’s level of 11.9% and estimates of 6.3% growth. The Yen did not react significantly to the data report with the Yen slightly up on the dollar in early trading.

This report marks the highest total merchandise trade balance for Japan since June of 2012, when the country actually saw a brief trade surplus of around $56B. Given the countries significant bout of currency depreciation we may continue to see the trade deficit fall as a weak Yen makes exports cheaper for foreign nations, while increasing the cost of imports for Japanese consumers. This is, of course, all part of Japan policymaker's recent strategy, characterized by aggressive monetary tactics, which are reeking havoc on the value of the Yen. Given the BoJ’s strong commitment to creating long-awaited growth in Japan, we are likely to see these aggressive tactics continue for some time, which should continue to keep the value of the Yen down.