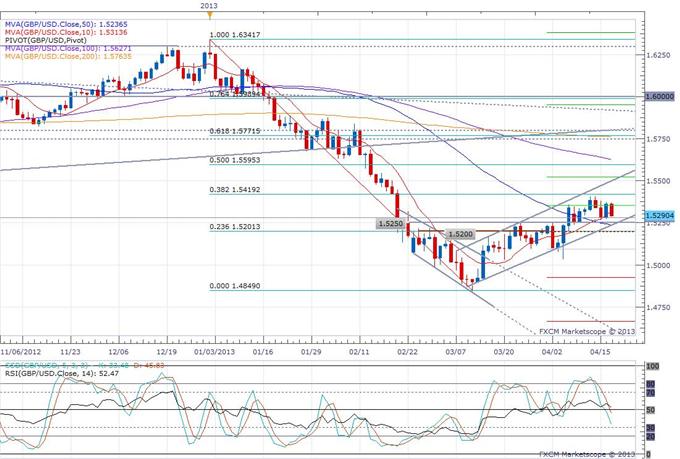 For the third month, the vote to keep the Bank of England’s asset purchase target at 375 billion Pounds was 6-3 during the April meeting. BoE Governor King was one of three Monetary Policy Committee members who advocated a 25 billion Pound rise to stimulus to help smooth economic adjustments.

The Bank of England said that the Euro crisis and a fiscal squeeze have weighed on demand; however, March inflation was reported at an 11-month high of 2.8%, remaining well above the central bank’s 2% target rate. The BoE said it sees inflation reaching 3% around mid year, and further predicted that UK economic growth in the first half of 2013 will be muted. The BoE’s remit was changed in March for the first time in a decade to allow a balance of a more flexible inflation target with growth considerations.

Employment numbers were also released today. UK jobless claims fell by 7 thousand in March, beating expectations for an unchanged claims numbers and even better than the 5.3 thousand decline in jobless claims in February. However, employment information released by the ILO about the three month period ending in February seems to be pressuring the Pound lower. The unemployment rate for the three month period was reported at 7.9%, a six month low, disappointing expectations for the rate to remain at 7.8%. Weekly earnings only rose 1.0% over the period, the worst rise in earnings seen on the 12-year record.

The Pound has fallen about thirty five points and below the 1.5300 level against the US Dollar following the worse than expected employment information for February. A broken resistance line around 1.5250 may now provide support for GBP/USD, and resistance may be provided by a 2-month high around 1.5409.