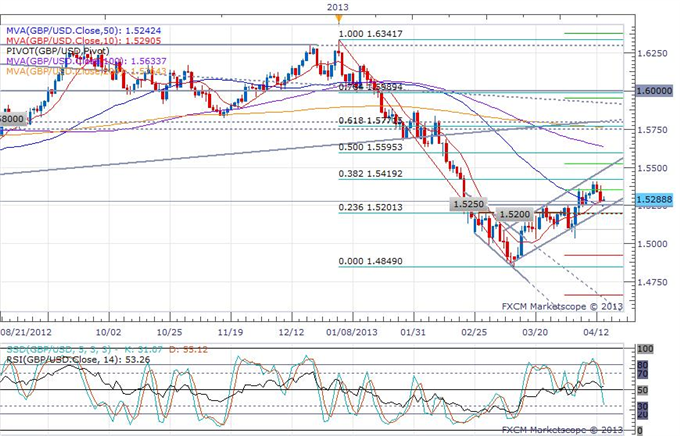 THE TAKEAWAY: UK annual inflation remains at 2.8% in March, an 11-month high -> BoE’s King says to look at inflation in context of a struggling economy -> Pound continues to trade steady

UK annual inflation remained at an 11-month high in March, bringing in to focus on the next Bank of England monthly policy meeting.

Consumer prices rose 2.8% from March 2012, meeting expectations and unchanged from the February annual inflation rate. The CPI rose 0.3% on a monthly basis in March, according to the UK Office for National Statistics. Producer prices rose 0.4% from March 2012 (non-seasonally adjusted), and the retail price index rose 3.3% annually.

The UK annual inflation rate has remained above the BoE’s target since November 2009, as the struggling economic performance has prevented the central bank from tightening monetary policy. The BoE said in February that it expects inflation to remain above its target rate for the next two years. BoE Governor King was one of the three Monetary Policy Committee members who voted unsuccessfully for a rise in the asset purchase target in March. King said in February that inflation must be looked at within a context of a struggling economy.

The Pound did not show a significant reaction to the as-expected inflation rate, and the pair continues to trade slightly below 1.5300 at the time of this writing. Support may be provided by a broken resistance line around 1.5250, and resistance may be seen by a 3-week high set last week at 1.5409.