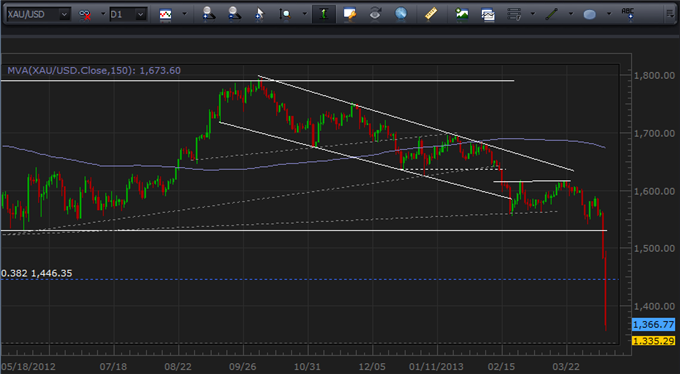 Gold Suffers a Record-Breaking Drop, Where to From Here?

Between Friday April 12 and Monday April 15, gold suffered a peak-to-trough plunge of over $200 or 12.8 percent. The intensity of this decline alongside the critical technical break below 18-month congestion support should leave little doubt as to the significance of the move. However, questions remain about where the metal goes from here. Is this a ‘flash’ move related to the mechanics of positioning and stops or is this a surge that signals the beginning of a new trend? Let’s shed some light on this remarkable picture.

Market conditions change and our strategy should reflect those changes. We have coded the DailyFX-Plus strategies for Breakout, Range and Momentum to adapt to these market shifts.

The Significance of a $200 Move

We can talk about the notional and percentage level moves for gold’s titanic drop alongside its comparison to historical moves. However, there are few better ways to appreciate the scale of gold’s recent move than to see it on a chart. In the chart below, we see the aggressive selling through the past two active trading days and relative to the ‘normal’ changes between quiet and active days. This flux was clearly ‘off the charts’.

From a purely market pricing standpoint, this particular leg of the commodity’s six-month bear wave accomplished something we haven’t seen in years – a strong confirmation towards lasting trend change. From the incredible bull trend we’ve seen from gold since 2008, we have progressed from a spike high, to months of congestion and now a material drive towards bearish positioning. We can see this in the chart below that the bearish progress from the mid-2011 spike high has doubled in the span of a few days and is within striking distance of the mid-point to the past five-year’s range at $1,300. 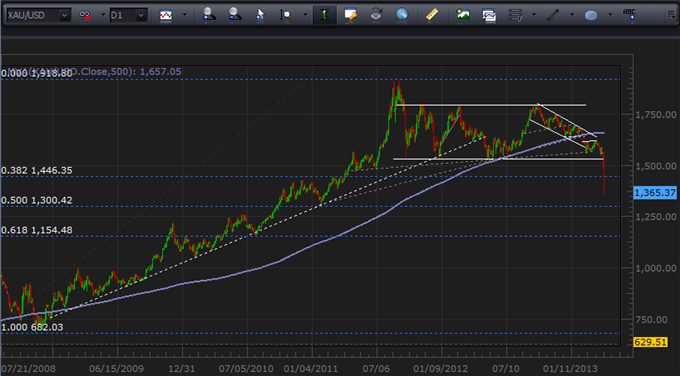 The chart of gold alone speaks volumes about the severity of the move we have seen, but it is worth looking at this picture in more of a historical context. Below we have a chart that shows the level of daily changes from the precious metal over the past decade. There have been a number of instances of significant price movements – with a notably consistent swell in activity around the top in the second half of 2011 – but there is no precedence for the drop suffered Monday. 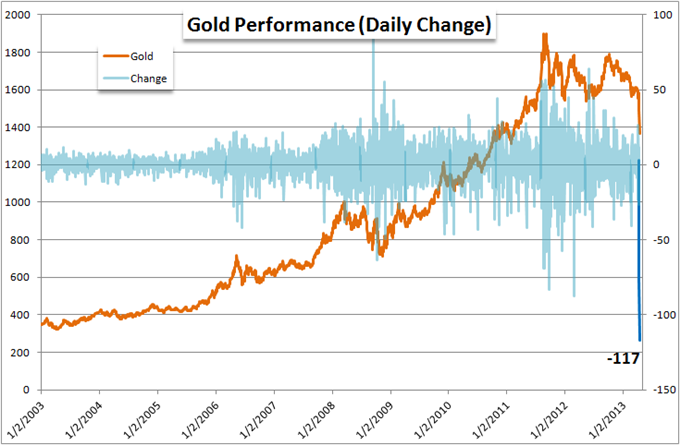 Back-to-back (so to speak) declines for gold of this magnitude reflect a very tentative move towards a trend. However, a trend is judged on a scale of more time, and that requires us to look more closely at the market participation mechanics and fundamentals that would keep the unwinding on pace. Without an active driver to keep this market on pace, there will be a natural inclination towards a short-term correction.

Assessing Market Mechanics to Project the Next Move

When there is a move – bullish or bearish – of the enormity of what we have seen recently with gold, it is important to consider how the crowd has positioned so that we can assess the likely next move. A few questions to consider: what level of activity did we see; did open interest rise or fall; was there a buildup of speculative shorts or was it purely deleveraging of existing longs?

There was certainly an exceptional level of volatility measured on the day. The chart below shows the CBOE’s Gold Volatility Index which showed its biggest single-day jump to rival the change in price itself. This clearly reflects short-term panic that can evolve from a meaningful technical development like dropping below $1,525 / 1,500. 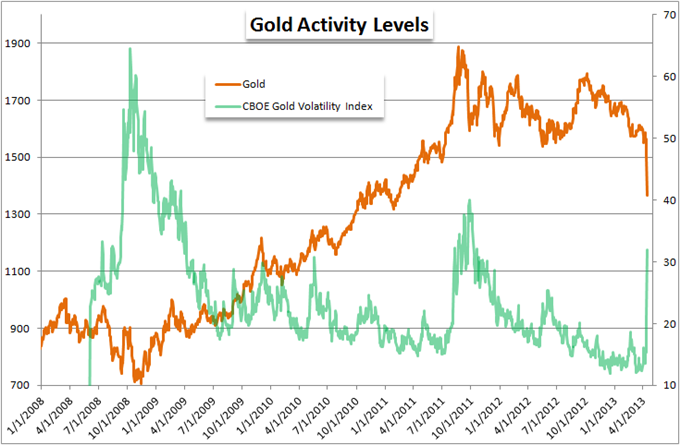 Volatility can be misleading just as price action itself can be. Another important aspect to consider is the participation level in the markets. If the markets were simply exceptionally thin, then it fewer selling orders or opening, short trades can generate a bigger move from the market. Indeed, the futures market has seen open interest (current positions) in gold was close to an eight-month low, but that is not particularly extreme.

Fully dispelling the notion that this was a low activity / high leverage move, we can look at the volume figures from the futures and ETF market. At the end of the day Monday, volume on the Chicago Mercantile Exchange (CME) tallied an astounding 700,000 futures contracts in volume (chart below) while the SPDR Gold Trust fund generated over 93 million shares in turnover.

This tells us that this was a concerted move with both an unwinding of existing long positions and a buildup of new short interest. Those that took short trades on the tumble will be debating when and where to book their quick profit. This segment of trader is the most sensitive to a rebound and would be the primary driver of any aggressive corrections. Profit taking and short-term, opportunistic long trades will likely take over the next move after the immediate panicked selling effort finally settles (that could possibly continue for a few more days depending on how much institutional interest will look to unwind). Yet, the trend after this extreme move requires a look at the fundamentals. 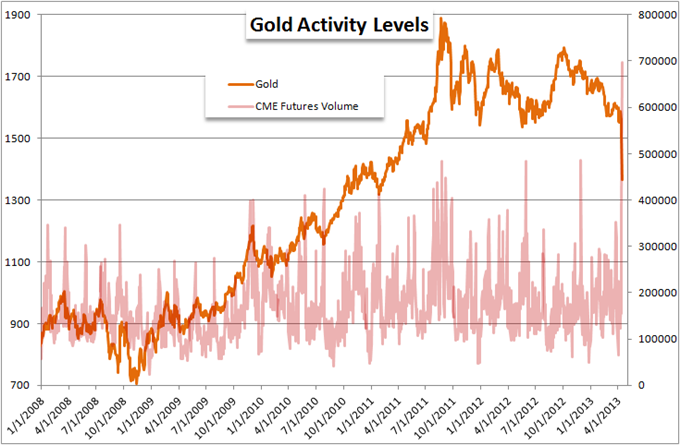 The Fundamentals of Gold Positioning

There are a number of roles gold plays in the global financial markets: safe haven; alternative store of value (to traditional currencies); inflation hedge; speculative asset. Understanding which function the commodity is performing can give us insight into the persistence of this young bear trend.

Arguably, the most prominent of drivers for the commodity through the past five years was the same catalyst that drove the US equity markets to its incredible recovery: stimulus. For stocks, support from the Federal Reserve and other global central banks translates into a tempered risk environment in which precarious investments with extremely low yield seems a reasonable trade. For gold, stimulus is seen as a means for leveraging inflation and devaluing currencies. The precious metal is one of the few alternative-stores-of-wealth that can reasonable take the place of a traditional ‘fiat asset’.

In the chart below, we can see the relationship between net central bank stimulus (from the Federal Reserve, Bank of Japan, European Central Bank, Bank of England and People’s Bank of China) and gold price. The long-term bullish correlation is clear. However, with this recent, extreme decline in the metal’s price; we don’t see a clear precedence from the size of central banks’ balance sheets. In fact, the near future is expected to see sizable contributions of stimulus from the Fed ($85 billion per month) and Bank of Japan (approximately $75 billion per month) which will easily offset contractions in others. 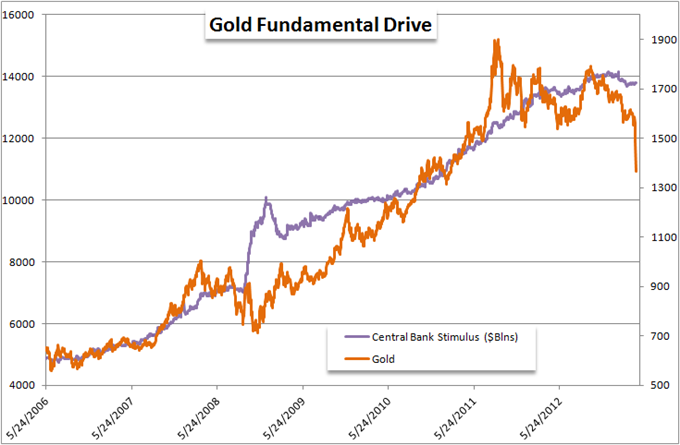 However, the markets are forward looking. And, while the BoJ has just recently announced a significant expansion to its balance sheet; discussion has turned to the eventual slowdown of the US central bank’s Quantitative Easing (QE3) program. Where the expectation was previously for steady injections of $85 billion dollars into the system each month through year end, consensus is now starting to turn towards a belief that the policy authority would start to taper by midyear and fully end before the year is out.

These expectations may be seen in investors’ positioning as well. Below, we see the total holdings of gold by exchange traded products (ETFs) which market participants by in the stead of holding the physical themselves. As we can see, divesting from this alternative to currencies began a number of months ago and continued to play out even as the commodity itself hesitated above $1,500. 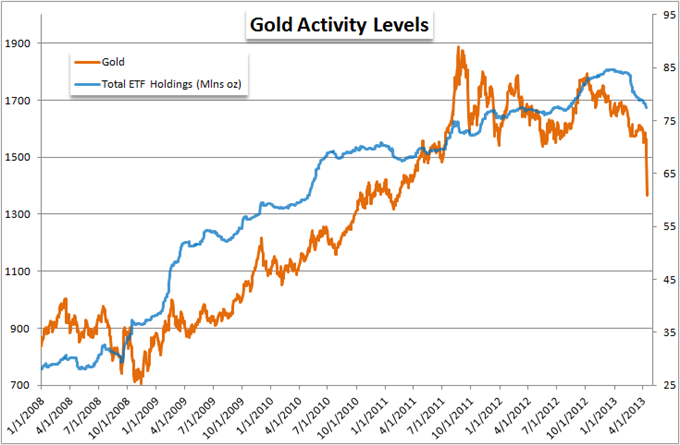 It can be difficult to assess expectations of stimulus and what impact it can have on market positioning, but there is an easy read to be found in the US dollar. The Fed’s efforts are the lynchpin for global central support for speculative markets – and the side influence it has in propping up gold’s value. If there is speculation (and a subsequent change in market exposure) related to the end of QE3, there is no better place to see it play out than with the Dow Jones FXCM Dollar Index (ticker = USDollar). In the dollar we see a direct victim of stimulus as well as a sensitive to the risk aversion that comes when the external support is removed.

Moving forward, the best signal for a consistent extension of gold’s selloff would be a rally for dollar. Alternatively, a drop from the benchmark currency could revive the hobbled commodity.