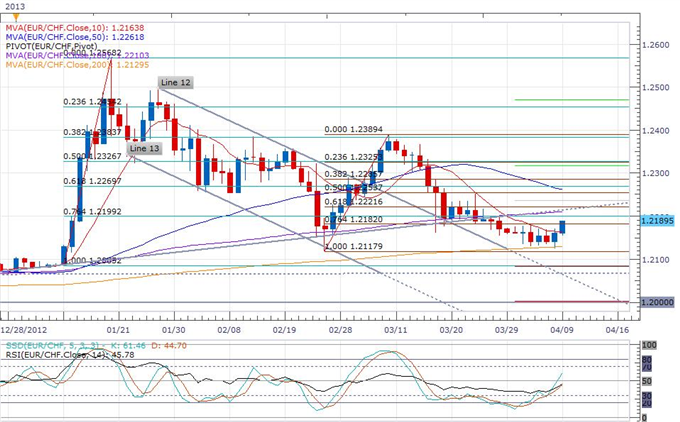 THE TAKEAWAY: Swiss deflation rate falls to an eight month low of -0.6% -> Drop in prices is accompanied by a resumption in SNB foreign currency purchases -> Franc drops slightly

The Swiss deflation rate fell to an eight month low in March, following a period when the Franc regained strength against the Euro. Swiss consumer prices declined 0.6% from March 2012, lower than expectations for a -0.5% deflation rate and down from the -0.3% rate in February. Consumer prices rose 0.2% over the month of March, according to the Federal Statistics Office.

Swiss consumer prices have been pushed down since 2011 largely by the flow of liquidity into the Franc by investors looking for a safe haven from the suffering Euro. In reaction, the SNB has reinforced a 1.20 cap in EUR/CHF trading since September 2011 through sales of an unlimited supply of the Swiss Franc.

The SNB’s foreign currency reserves rose from 250 billion Euro to 400 billion in 2012, because of the intensified Forex intervention, which helped bring the Swiss annual deflation rate from a 3-year low of -1.1% to a yearly high of -0.2% in 2012. However, the SNB was able to largely hold off on foreign currency purchases, as the Franc naturally depreciated during the Euro rally at the end of 2012. In March, the deflation rate declined to an eight month low as Euro worries rebuild and the Euro erased most of the gains from the past six months.

Earlier today, SNB President Jordan said the central bank’s exit from the Franc cap is still far away, and in March we saw the highest rise in six months in SNB foreign currency reserves. Lower inflation allows the SNB to further sell off the Franc without worrying about increases in local prices.

That’s why the Euro rose slightly against the Franc following the worse than expected drop in inflation. EUR/CHF is trading slightly below 1.2190 at the time of this writing, and the pair may next see resistance at 1.2200, by the 76.4% retracement of the rise from the January low to the January high. Support might be provided at 1.2130, by the 200-day moving average.