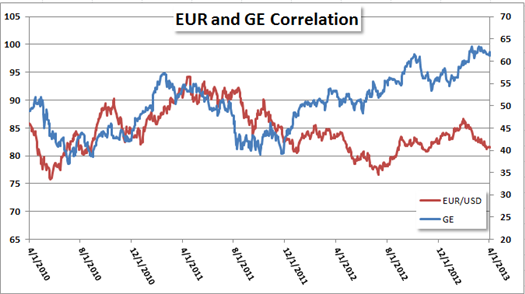 Fan of GE and Other Blue Chips? Don't Get Blindsided By Currency Risk.

THE DANGER AT HAND

While many “blue chip” stocks have significant international exposure to thank for their historically strong earnings, they must face the danger of currency risk in doing so. Just ask the perennial blue chip General Electric, which had$1.1 billion dollar foreign exchange loss to thank for disappointing earnings in Q2 of 2012. Unfortunately for many equity investors such a loss is not a one-time affair, as currency fluctuations pose an all too real danger to most large international corporations. Often a company is able to hedge some of this currency risk through advanced derivatives, but such measures only protect against the rising costs of goods sold (supply side). As a result, firms like GE are left exposes to the fluctuations in demand caused by the decreasing value of foreign currencies like the Euro. This major loss lead to the disappointing earnings mentioned above and the 9% drop in stock price, which followed over the last month. Such occurrences provide proof of the importance of hedging equity positions with the appropriate currency pair holdings.

What is a Currency War? Who is engaging in one right now? How is it impacting your trading? Take our free course and find out!

THE DOLLAR, THE EURO, THE DEMAND

As General electric’s second largest geographical sales segment (19% of revenues in 2012), demand for GE products in Europe has a significant impact on earnings. While stronger Euro-zone economies certainly lead to increased demand due to more jobs and greater spending, the relative value of the Euro versus the dollar also has a major impact. When the Euro is strong versus the dollar, Europeans are able to buy GE products at cheaper prices than when it is weak. This is because EU consumers must pay dollars for the company’s goods, thereby effectively exchanging euros for dollars when making a purchase. Therefore, when the euro is strong against the dollar, these buyers get “more bang for their Euro” than when it is weak. These lower prices then create more demand for GE merchandise, resulting in higher corporate earnings and hopefully an appreciating stock value. This leads the euro to be positively correlated with GE stock price.

This idea does not only apply to Europe and the euro, but on a much broader level as well. When we compare GE stock price to the Dow Jones FXCM dollar index (an equally weighted index of the dollar versus the Euro, Pound, Yen, and Aussie) we find that GE stock price has historically been negatively correlated with the dollar. This makes sense, since a cheaper dollar should mean less expensive GE dollar denominate products for those paying with foreign currencies. The chart below shows the strong divergence between dollar price and GE stock. 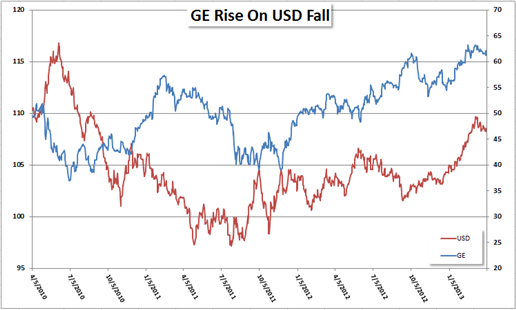 Given the above evidence of the demand-side currency risk faced by GE, the need for individual investors to take hedging measures is apparent. For instance, between May 1st and June 4th of 2012, GE stock took a major hit, falling nearly 8% on underwhelming earnings numbers. Had an investor held an equivalent amount of USD/EUR-short however, the would have cut this loss by more than half, as the dollar appreciated by over 5% against the Euro during the same period. And then there is the grand -daddy of them all, the recent financial crisis, where GE fell 29% in value between July 2008 and June 2010 (alongside much volatility)! During this same period, the USD appreciated by 16% against the Euro and would have been a great hedge amid all the crashing stocks. While these are only a few instances of the successful hedging opportunities (Currency hedging with Apple, Toyota, and Ford) provided by a USD/EUR short, when holding international “blue chips” like GE, the meaningful negative correlation between the two assets should provide equity investors with plenty of reason to consider holding currency positions moving forward.