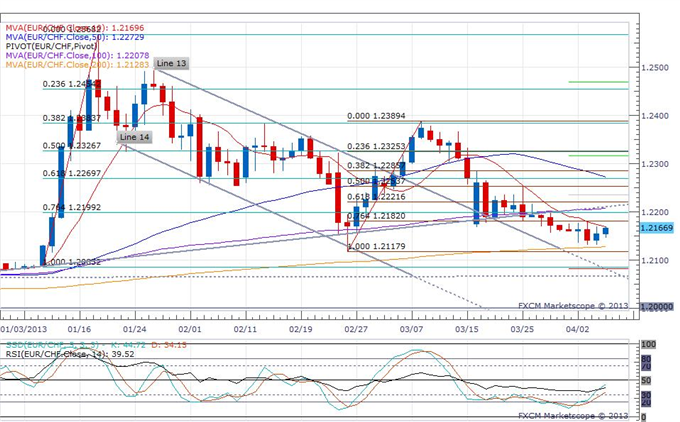 The SNB’s foreign currency reserve level seemed to stall below 430 billion Francs in October 2012, as a rally in Euro trading eased the pressure on the SNB to maintain the 1.20 floor in EUR/CHF trading. However, the recent selloff in Euro on weakening economic data has driven the pair back to within 150 points of the level reinforced by the central bank, and may be forcing the SNB to restart its foreign currency purchases.

SNB President Jordan said in February that he thought the bank won’t have to continue buying foreign currencies, as the Franc will naturally continue to depreciate with the Euro-zone recovery. However, signs of the recovery are stalling, and Euro sellers are looking for safe haven currencies like the Franc, thereby bringing the SNB back to the Forex table.

The 1.20 floor in EUR/CHF has been maintained since September of 2011, when the SNB said it will buy the Euro using an unlimited supply of the Swiss Franc. The SNB spent 188 billion Francs in 2012 to enforce the cap on its currency, the equivalent of nearly a third of the Swiss GDP, and the currency pledge was reiterated by the central bank in its March meeting.

The Euro rose towards 1.2170 against the Franc following the announcement. Resistance might next be provided at 1.2180, by the 76.4% retracement of the rally from the February low to the March high. Support could be provided at 1.2128, by the 200 day moving average.