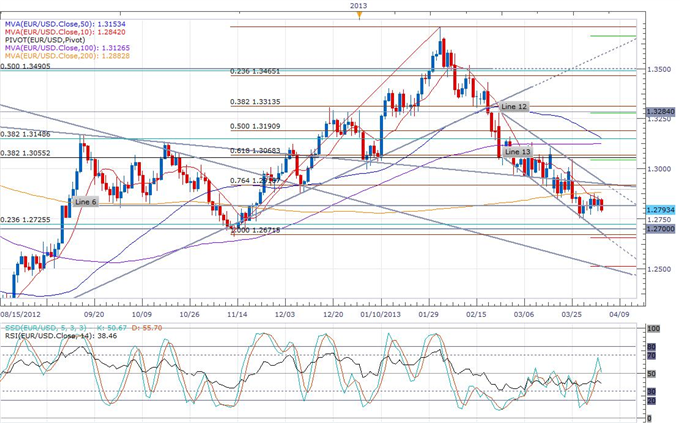 Euro Breaks Below 1.28 on a Weaker Services PMI

THE TAKEAWAY: Euro-zone Services PMI revised lower to 46.4 in March -> Markit sees no end to the recession in Q1 -> Euro breaks below 1.2800

Markit’s Purchasing Managers’ Index for services in the Euro-zone was revised lower from a previous March estimate, sending the Euro back below 1.2800 against the US Dollar in Forex markets.

The Services PMI was reported at 46.4 in the final March estimate, down from a previous estimate of 46.5 and lower than the 47.9 PMI in February. The composite PMI was confirmed at 46.5 in today’s release. The composite output index shows contracting overall activity in the services and manufacturing sectors since January 2012, when the PMI was last above the neutral 50.0 PMI level.

The German and French services PMI’s were revised lower from earlier estimates, to 50.9 and 41.3 respectively. The France composite PMI was reported at 41.9, marking the steepest fall in output in four years. In the Euro-zone, March saw the largest monthly fall in new orders since December and the fastest drop in new business since September, according to Markit. Employment declined for the fifteenth consecutive month.

The Euro-zone GDP declined for the fifth straight quarter in Q4 of last year, and the ECB predicted in March that the economy will contract another 0.5% in 2013. Markit said that businesses are concerned with the ongoing debt crisis and political instability, and it does not see an end to the recession in the recently ended quarter. “While the first quartercontraction is likely to have been less steep thanthe 0.6% decline seen in the final quarter of lastyear, the concern is that the Eurozone downturnshows no signs of ending,” said Markit Chief Economist Chris Williamson.

The Euro fell about forty points against the US Dollar as the PMI’s from around the Euro-zone were released below expectations. EUR/USD may next see support by a four month low at 1.2750, and resistance may now be provided by a broken support line around 1.2820.