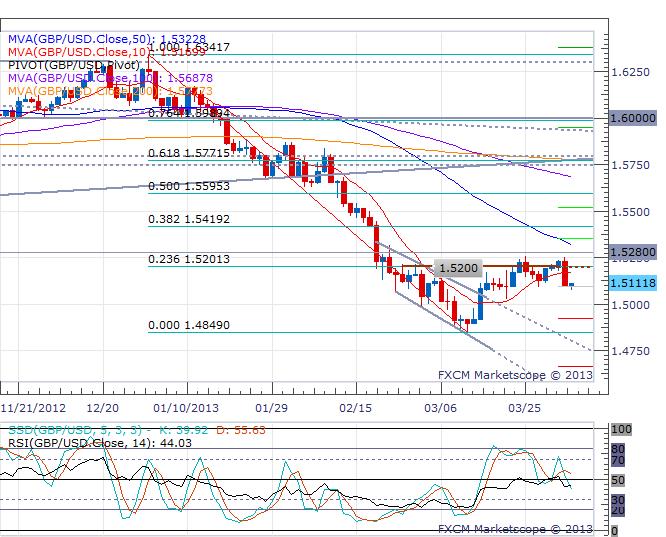 The Purchasing Managers’ Index for construction in the United Kingdom rebounded from a 3-year low, according to Markit. The PMI was reported at 47.2 in march, disappointing expectations for 48.0, but an improvement from the three year low in February at 46.8. The PMI has remained below 50.0, and therefore indicated a contraction in construction activity, for the past five months.

Markit reported that anecdotal evidence pointed to a combination of subdued underlying demand and bad weather as the reason for the lower construction output in March. Residential construction output rose at a marginal pace in February, while commercial activity decreased for the seventh of the past eight months. The monthly decline in jobs in the construction sector was the first in 2013.

The UK GDP declined 0.3% in Q4, and is now one quarter away from entering a triple dip recession. Combined with the weak manufacturing PMI for March, Markit reported that only a good performance in the services sector could prevent the UK from entering the technical recession. Worse than expected PMI’s are Pound negative, as they suggest worsening economic growth in the coming months.

That is why the Pound declined temporarily against the US Dollar following the release, however the pair soon erased most of those losses and returned back above 1.5100. Focus in Pound trading may be set on tomorrow’s BoE meeting. Based on expectations, if the MPC votes to keep monetary stimulus as is, the decision may be perceived as Pound positive. Resistance for GBP/USD may now be provided at 1.5200, which is the neckline of a possible inverse head and shoulders pattern. Support may be provided by the key 1.5000 level.