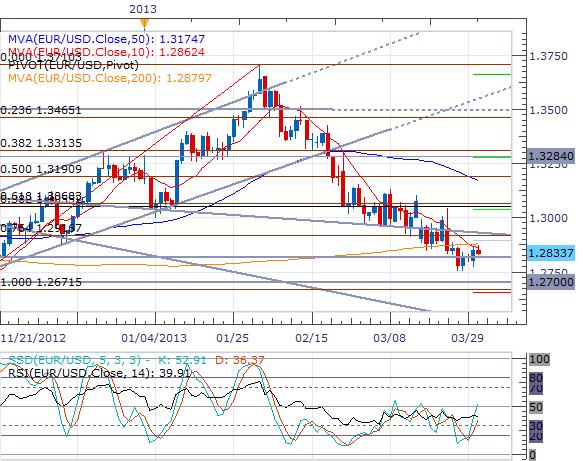 The Euro-zone Purchasing Managers’ Index for Manufacturing in March was revised slightly higher according to a final release by Markit. However, the PMI is still down from an 11-month high set in January, and the PMI has continued to indicate a declining manufacturing sector since July of 2011. The PMI for Manufacturing was revised to 46.8 from a previous estimate of 46.6, but is down from 47.9 in February.

The German PMI for manufacturing declined back below the 50.0 neutral level in March, but the final estimate was revised 0.1 higher to 49.0. The France manufacturing PMI was revised slightly higher to 44.0, and the Italy index disappointed expectations today at 44.5 for March, setting a 7-month low.

Manufacturing production contracted at the fastest pace year to date, as companies saw decreases in new business inflows, according to Markit. New export orders resumed a decline in March on lower demand from intra-Euro-zone trade. Job losses were reported in the sector for the fourteenth straight month.

The Euro-zone saw five straight quarters of economic contraction ending with Q4 2012, and the ECB predicts a 0.5% GDP decline in 2013. Today’s PMI worsens expectations for the recently ended first quarter. Markit Chief Economist Chris Williamson said, “The Eurozone manufacturing sector looks likely to have acted as a drag on the economy in the first quarter, with an acceleration in the rate of decline in March raising the risk that the downturn may also intensify in the second quarter.”

The Euro did not initially react to the slightly better than previously estimated PMI, but EUR/USD declined about twenty points a bit after the release. The pair is trading around 1.2835 in Forex markets at the time of this writing, and support may be provided around 1.2820, by the longer term support line.