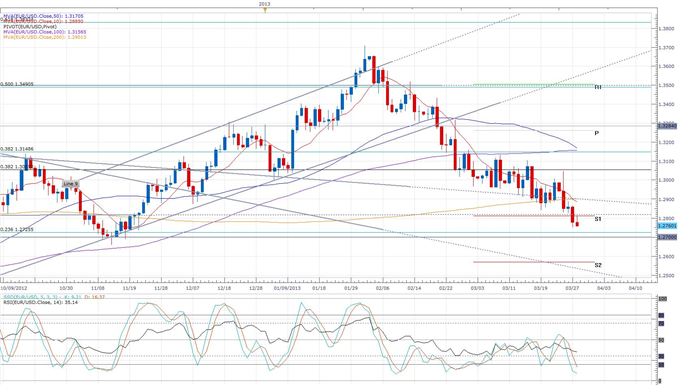 Euro Losses Stick on a Surprise Rise in German Unemployment

THE TAKEAWAY: Thirteen thousand more Germans found themselves out of work in March -> unemployment rate remains at 6.9% -> Euro losses ahead of the release remain

The number of Germans who are looking for work increased for the first time in four months in March. The unemployment change was reported at 13,000, disappointing expectations for the unemployment to drop by two thousand and worse than February’s revised unchanged unemployment numbers. The German unemployment rate remained at 6.9% in March, only slightly higher than the 6.8% record low since the start of the Euro-zone.

The German economy declined 0.6% in Q4 2012, but the Bundesbank predicted in February that the German economy will return to growth in the current quarter on improved industrial production. Earlier today, German retail sales were reported to have grown 0.4% in February. Germany is the biggest and one of the strongest economies in the Euro-zone, and signs of worsening economic health in Germany are negative for the Euro.

The Euro fell about 25 points against the US Dollar in the minutes ahead of the release, but it is unclear if the decline was caused by the anticipation for the German employment numbers or by one of the larger themes weighing on the Euro, like the Cyprus bank crisis or the political instability in Italy. EUR/USD is currently trading around 1.2760, and a four month low set yesterday at 1.2750 may provide support.