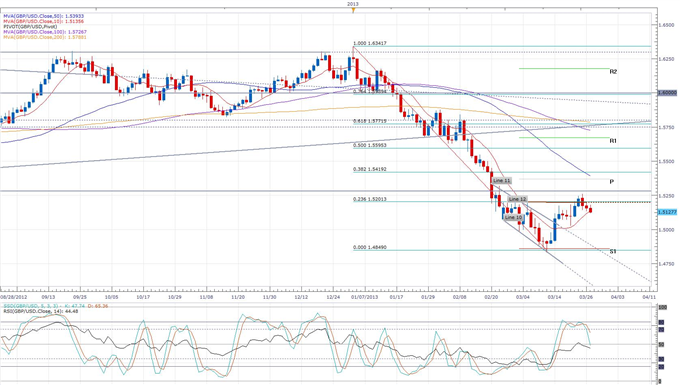 A combination of a confirmed declining GDP, a worse than expected current account, and a BoE announcement about a capital shortfall, has caused the British Pound to decline more than thirty points against the US Dollar to 1.520.

The UK gross domestic product was confirmed in a final estimate to have declined 0.3% in the fourth quarter of last year, and the economy remains one quarter away from a technical recession. The economy expanded 0.2% from Q4 2011, slightly worse than the UK Office for National Statistic’s previous estimate of 0.3% annual GDP growth.

Also, the UK current account for Q4 was -14.0 billion Pounds, lower than expectations for -12.5 billion Pounds and down from a revised -15.1 billion in the third quarter.

Finally, the Bank of England said that UK banks must raise at least 25 billion Pounds to cover shortfalls caused by worse than expected loan losses, potential fines, and better risk calculations. The banking shortfall comments come on the back of a Cyprus deal that is supposed to result in significant losses to large depositors.

The combination of the three releases sent GBP/USD down to 1.5120, and Cable continues to trade only a few points above that level. The pair may see support by the key 1.5000 level, while resistance may continue to be provided by the 1.5200 line.