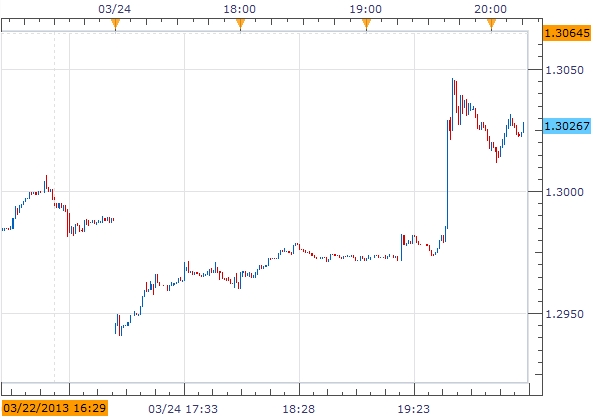 Euro Surges After Cyprus Was Able To Protect Small Depositors

THE TAKEAWAY: The Euro surged higher as Cyprus reached an agreement with the Troika in early Asian trading that claimed to protect small depositors with deposits under 100,000 euros.

Cyprus President Nicos Anastasiades reached a tentative agreement with the Troika in early Asian trading for a 10 billion euros bailout loan. The deal claimed to protect small depositors with deposits under 100,000 euros. Meanwhile, deposits above 100,000 will be subject to losses up to 40 percent.The solution to the Cyprus deadlock has safeguarded investors’ confidence and quelled the fear of an exit of Cyprus from the Eurozone. The short-term goal of the deal was to avert substantial deposit withdrawals once the banks in Cyprus open again, which would otherwise lead to insolvency risks in the banking sector.

Negotiations are ongoing, however the agreement called for the Cyprus Popular Bank Pcl to be shut down and split, with the Bank of Cyprus taking over the assets of the CPB and receiving 9 billion euros in liquidity provided by creditors.

Despite concerns in Cyprus partially dissipating, the remaining uncertainties on the exact amount of losses from uninsured deposits could still add to the possibility of a Cyprus exit from the Eurozone if the bailout loan is not matched by 5.8 billion euros from the Cyprus banking sector. This agreement also marks the second time in just 9 days that Cyprus has struck a deal with the IMF and other European creditors with the first deal falling apart just 3 days later when the Cypriot parliament rejected a proposed tax on all bank accounts.