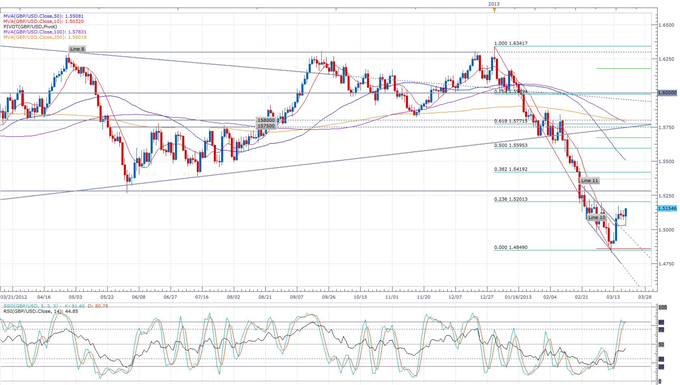 The Bank of England announced in its minutes today that the vote to not add to the asset purchase target remained at 6-3 for the second straight month. The minutes refuted earlier speculation that more BoE members had voted to increase stimulus, which is why the Pound jumped about 100 points against the US Dollar following the release.

Majority of BoE members agreed that there are limits to what more QE can now achieve, while a minority said further easing could help smooth economic adjustments. Furthermore, most MPC members were worried that further Pound weakness could lead to an unwarranted drop in Pound. BoE Governor King, along with Fisher and Miles, voted for an increase of 25 billion Pounds to the asset purchase target.

The Bank of England members agreed that growth is likely to pickup in 2013. The UK GDP declined 0.3% in Q4, and is now one quarter away from entering a technical triple dip recession. UK inflation was reported at a ten month high of 2.8% in February and well above the BoE’s 2.0% inflation target. BoE’s King said in February that trying to subdue inflation may hurt growth.

The British Pound found its way well above 1.5100 against the US Dollar following the minutes announcesment. GBP/USD will see further event risk today when UK Chancellor Osborne presents the 2013 budget to the parliament. The pair may see resistance at 1.5201, by the 23.6% Fibonacci retracement of the decline from January’s high to March’s low.