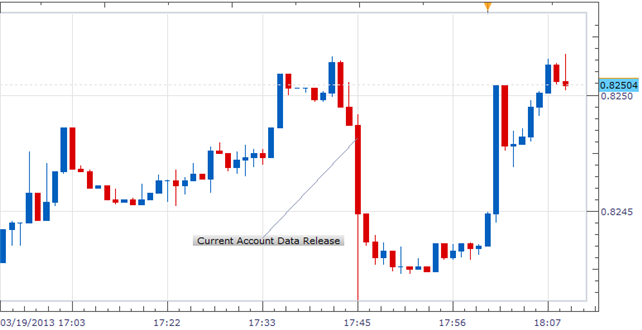 THE TAKEAWAY: New Zealand’s Current Account Deficit at -3.255B in Q4 > Deficit may lead to NZD’s depreciation, on heels of dovish comments by RBNZ > NZD Outlook Bearish

New Zealand’s Current Account Balance came in at -3.255B in the fourth quarter versus estimates of -2.950B and a third quarter account deficit of -4.418B. This account deficit equates to a 5% current account deficit to GDP ratio for New Zealand, which has been increasing steadily since March of 2010. The Kiwi fell against the dollar on the data release, but quickly rebounded.

Although New Zealand’s current account deficit has shown an increasing trend over recent years, the currency has appreciated in value significantly over the last several months thanks to its investment status. This has lead the Reserve Bank of New Zealand (RBNZ), or more specifically its governor Graeme Wheeler, to take a more dovish monetary stance, evident by his comments following the RBNZ’s most recent rate decision. Actions by the nation’s central bank, aimed at devaluating the currency, may be unnecessary, however, should the country’s deficit continue to put downward pressure on the Kiwi. This may take place given a fall in the market’s current risk-on sentiment, which has held the New Zealand dollar up. FXCM traders should look towards the New Zealand GDP data release set on March 20th, which will certainly have an affect on the RBNZ’s monetary policy and forex investors faith in the nation's currency.