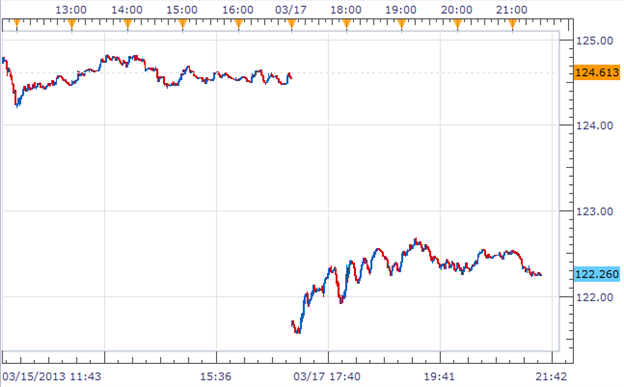 THE TAKEAWAY: Cyprus bailout plan proposes tax on bank deposits > Levy has ignited fear of region-wide capital flight > Euro plummets against all of its major counterparts

A bailout plan for Cyprus announced on over the weekend has pushed the Euro sharply lower at the start of the trading week amid rising fears of mass capital flight.The proposal ties a €10 billion international bailout from the so-called “troika” (EU/ECB/IMF) to a levy on Cyprus banks’ accounts. Deposits up to €100,000 for both resident and non-residents are to be taxed at 6.7 percent tax while those above that threshold are to pay out 9.9percent. For his part, Cypriot President Nicos Anastasiades has voiced support for the levies but has claimed to be working to shift more of the burden from small depositors to large ones.

While Cyprus is a relatively small economy – comprising just 0.2 percent of overall Eurozone GDP – the level of panic evident across financial markets likely reflects fears of the precedent that EU officials are setting. As with Greece, investors are transposing what is happening now Cyprus to what a similar course of action might look like were to be implemented in a country like Spain, where a sickly banking sector is likewise at the center of the country’s malaise.

As markets near the opening bell in Europe, this is creating concerns about a bank a run across the Eurozone as depositors scramble to move their capital out the region to avoid a Cyprus-like scenario. This potentially carries the risk of regional credit crunch, which could raise questions about the solvency of some weaker lenders. If one were to topple, a global crisis akin to the fall of Lehman Brothers would not be out of the question.

The Euro plummeted against all of its counterparts at the start of the trading week. The most pronounced decline was recorded against the Japanese Yen, where the single currency fell nearly 2 percent. EUR/USD likewise tracked downward, hitting the lowest levels since December, 2012. 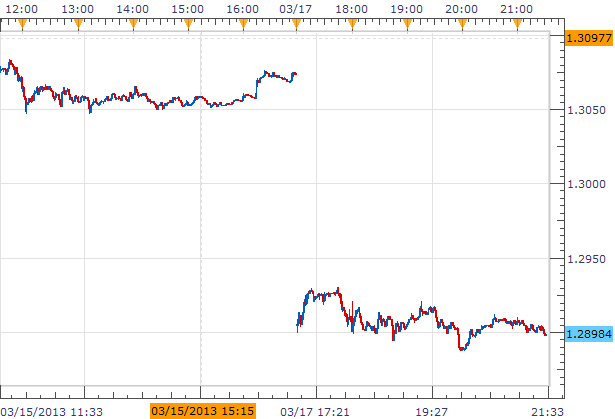