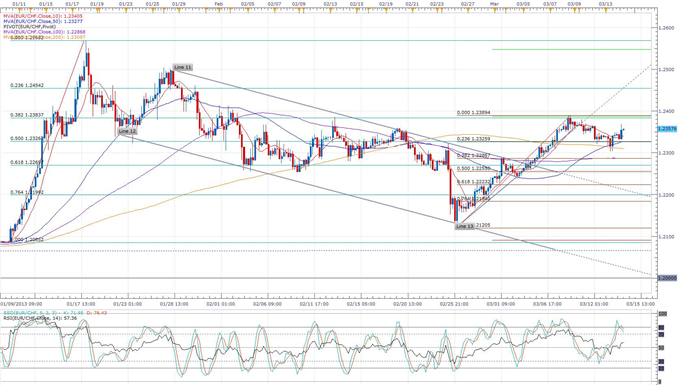 THE TAKEAWAY: The SNB maintains a 1.20 Franc cap with utmost determination -> SNB leaves interest rate at 0.00% -> No significant changes to Franc trading

The Swiss National Bank will maintain the Franc ceiling against the Euro with utmost determination and is willing to buy unlimited quantities of foreign currencies, according to the announcement made after today’s quarterly meeting. The SNB also left the target interest rate at 0.00%, as was expected. The SNB last changed the interest rate in August 2011, cutting the rate from a previous 0.25% level.

The SNB forecasts inflation at -0.2% for 2013, following a previous forecast of -0.1% for the current year. The 2014 inflation forecast was also lowered to 0.2% from 0.4%. The SNB also forecasted a 1-1.5% GDP growth in 2013. The central bank said the downside risks to the Swiss economy remain significant as it sees a risk of Euro-Area tensions returning.

The SNB comments about the Franc cap reflected SNB President Jordan’s comments from February, when he said that he doesn’t see a need for further Forex intervention as he thinks the Franc will devalue further with the unraveling of Euro uncertainty, but Jordan also expressed his commitment to further purchases if necessary. In 2012, the SNB spent 188 billion Francs on foreign currency purchases intended to enforce the ceiling on Franc trading. The 1.20 ceiling has been in place since September 2011 as a measure to ensure lower export prices, thereby placing Switzerland as one of the active participants of the so-called currency wars.

The announcement of the unchanged monetary policy had no lasting effect on Franc trading against the Euro. EUR/CHF is currently trading slightly above 1.2350, and may see resistance by a month-long high at 1.2390, which is also by the first resistance according to monthly pivot points. Support may be provided at 1.2270, by the 61.8% Fibonacci retracement for the January rally.