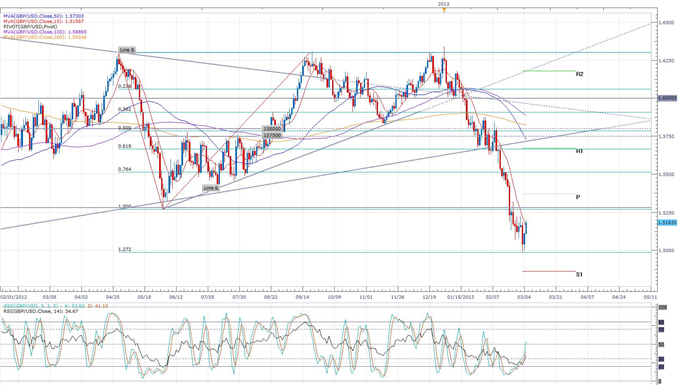 Pound Rises Towards 1.52 on an Improved Services PMI

The Pound has finally received some strength from a PMI following two days of cable declines on disappointing index results. The UK Purchasing Managers’ Index for services in February climbed to a 5-month high at 51.8, beating expectations for 51.0 and better than 51.5 in January. A PMI above 50.0 indicates increased sector activity.

Markit also reported that confidence regarding future activity in the services sector rose to a nine month high in February. New business in the service sector also increased at the sharpest pace in nine months, as was the rate of job creations.

Markit’s Chief Economist Chris Williamson said that the faster growth in the dominant services sector offset downturns in the manufacturing and construction sectors. Williamson also said, “the PMIs suggest that the economy will have grown by 0.1% in the first quarter, barely making up for any of the 0.3% decline seen in thefinal quarter of last year.”

The UK economy declined by 0.3% in Q4 of 2012, and is now one quarter away from entering a technical triple dip recession. Signs of improved economic growth are Pound positive, which is why Sterling rose about 30 points against the US Dollar towards 1.5200 following the PMI release. GBP/USD is currently trading slightly below 1.52 in Forex markets. Resistance may be provided by a broken support line around 1.5280, and support may continue to be seen by the key 1.5000 line.