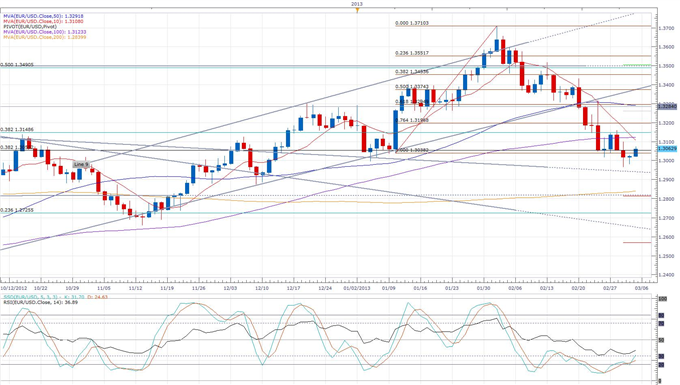 THE TAKEAWAY: Euro-zone composite PMI revised higher to 47.9 for February -> Markit unsure if German growth can offset weakness from France, Spain, and Italy -> Euro rises past 1.3050

February’s Euro-zone composite output index receded from January’s 10-month high, but the index was revised higher according to today’s final revision by Markit. The composite Purchasing Managers’ Index was revised to 47.9, higher than a previous estimate of 47.3. The PMI for services was also revised to 47.9 from a previous estimate of 47.3. A PMI below 50.0 indicates a decline in sector activity.

Germany’s composite output index was the highest in the Euro-area at 53.3, while France saw one of the worst composite output declines in the region, at 43.1. Also, Euro-zone employers cut jobs for the fourteenth straight month, according to Markit’s PMI release.

Markit Chief Economist Chris Williamson said, “Germany is on course to see the strongest quarterly growth since the spring of 2011.” However, Williamson is not convinced that the German growth will offset the weakness seen in France, Italy, and Spain. Williamson concluded, “hopes of a return to growth for theregion by mid-2013 are now looking too optimistic.”

Signs of improved economic growth are Euro positive, which is why the Euro rose about 30 points against the US Dollar as the better than expected PMI’s were being released around the Euro-zone. EUR/USD is now trading around 1.3060, and may see resistance at 1.3149, by the 38.2% Fibonacci retracement of the decline from the 2011 high to the 2012 low. Support may be provided by the key 1.3000 level.