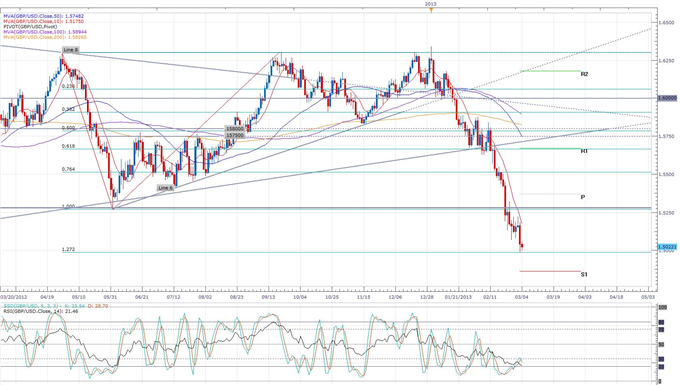 Pounds Falls Back to 1.50 on a 3-Year Low Construction PMI

THE TAKEAWAY: UK PMI for construction falls to 46.8 in February, worse than expected -> UK on the verge of a triple-dip recession -> Pound falls to 1.50

UK construction activity has declined at the fastest pace since October 2009 according to Markit’s Purchasing Managers’ Index. The PMI for construction fell to 46.8 in February, worse than the expected 49.0 index result and down from 48.7 in January. A PMI below 50.0 indicates a decline in sector activity.

The tone from the Markit release was not positive when talking about the construction sector, which has now shown 4 straight months of declining activity. Markit Senior Economist Tim Moore said, “This is undoubtedly a dismal set of data for the UK construction sector, especially the sharp falls in commercial building work and civil engineering activity.”

The UK PMI for manufacturing also declined in February, according to last week’s release. The UK economy contracted 0.3% in Q4, and the two PMI releases for February don’t point to improved growth in Q1. BoE’s King said in February that growth will be weaker in the near term. If the UK sees negative growth in Q1, then the economy will have entered a technical triple dip recession. Signs of another quarter of negative GDP are Pound negative.

That is why the Pound declined about 50 points against the US Dollar in Forex trading following the release. GBP/USD is currently trading slightly above the key 1.5000 figure, which may continue to provide support. Resistance may be provided by a broken support line around 1.5280.