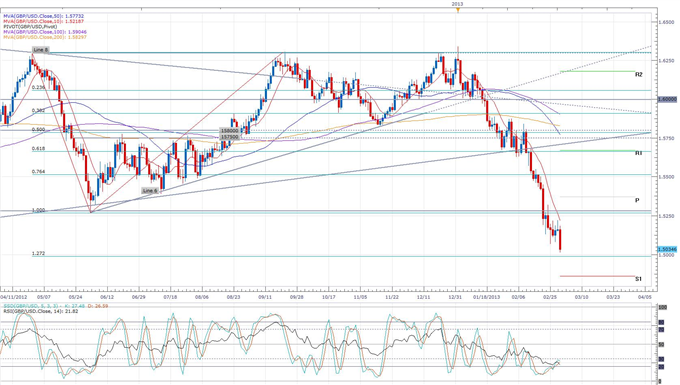 UK manufacturing activity contracted in February following two straight months of increased activity, according to Markit’s Purchasing Managers’ Index. The PMI was reported at 47.9, disappointing expectations for 51.0 and lower than January’s revised 50.5 index result. A PMI below 50.0 indicates contraction in sector activity.

The drop in new orders recorded in February was partially due to weak export demand from Europe. Production fell for the first time since October, following the fastest rise in output in 21 months that was reported in January. Also, the degree of job shedding was the fastest in 40 months, according to Markit.

Bank of England Governor King said that although a recovery is in sight in the UK, growth will be weaker in the UK in the near term. Meanwhile, NIESR cut its 2013 growth forecast to 0.7% in February. Markit Chief Economist Chris Williamson said, “The return to contraction of the manufacturingsector is a big surprise and represents a major set- back to hopes that the UK economy can return to growth in the first quarter and may avoid a triple-diprecession.”

Signs of decreased UK economic growth are Pound negative. Also weighing on Pound trading, UK mortgage approvals in January declined to 54.7 thousand from a revised 55.6K in December. The release was worse than expectations for a rise in mortgage approvals to 56.5K.

Following the weak PMI release, the Pound has declined over 100 points against the US Dollar in Forex markets and is trading around 1.5035 at the time of this writing. Support may be provided by the key 1.5000 line, which hasn’t been broken in 2.5 years. Resistance may now be provided by a broken support line around 1.5280.