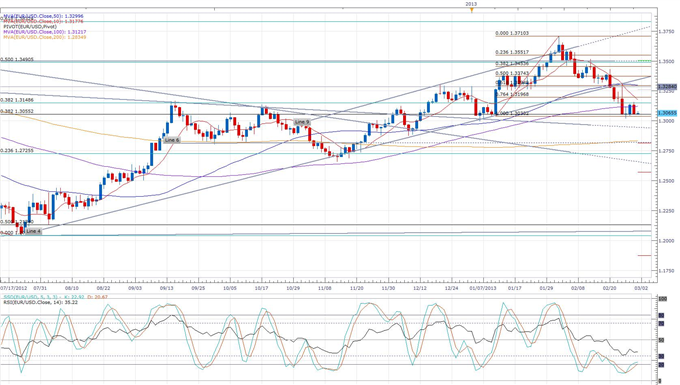 THE TAKEAWAY: German retail sales rise 3.1% in January -> The sharpest rise in sales in five years falls in line with predictions for economic growth -> Euro lower on news from Italy

German retail sales have seen the largest monthly rise in five years, adding to hopes that the Euro-zone’s biggest economy will show positive growth in Q1.

Retail sales increased 3.1% in January, beating expectations for 0.9% growth and better than the revised 2.1% decline in sales in December. Retail sales are 2.4% higher than January 2012, according to the Federal Statistical Office.

The rise in retail sales follows recent announcements of improved consumer confidence and lower unemployment. The Bundesbank has recently predicted that the German economy will see a return to growth in the current quarter, and the European Union predicts 0.5% German growth over 2013. Signs of improved German economic growth are Euro positive.

However, the better than expected release had little effect on Forex trading, as the single currency declined against the US Dollar just minutes before the release. There were reports that that Italy's center-left Bersani said he ruled out a coalition with Berlusconi's center-right, which may have been responsible for the Euro weakness. EUR/USD is currently trading around 1.3065, and the pair may continue to find support at 1.3038, by the 38.2% Fibonacci retracement of the pair’s rally from its all time low to its all time high.