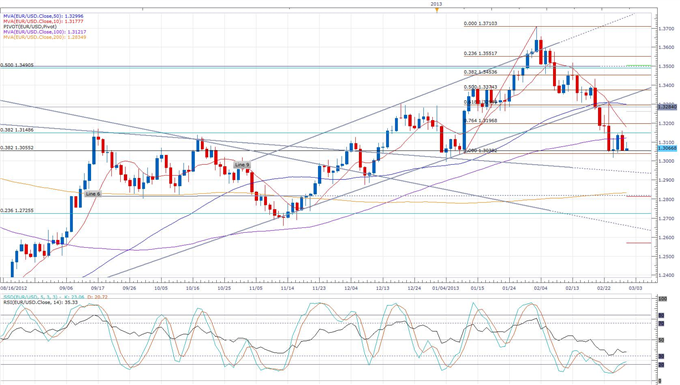 Euro Whipsaws on Varying PMIs from Spain and Italy

The Euro-zone Purchasing Managers’ Index for manufacturing remained at a 12-month high in February, and did not decline as was previously estimated. Markit’s PMI was revised higher to 47.9 from a previous estimate of 47.8, the new PMI is unchanged from the January index result. A PMI below 50.0 indicates a contraction in sector activity.

Ireland saw the best PMI for manufacturing in February, at 51.5. The German PMI was revised slightly higher to 50.3 and set a mew 13-month high. The French PMI was revised higher to 43.9, but still was one of the worst index results in the Euro-area.

The PMI helps forecast economic growth for the upcoming months, and although today’s release shows continued contraction in February, it doesn’t contradict the ECB’s prediction of a Euro-zone recovery later in the year. Markit Chief Economist Chris Williamson said, “while the manufacturing sector is likely to haveagain acted as a drag on the overall economy in the first quarter, causing GDP to fall for a fourth consecutive quarter, there aresigns that thedownturn has become less severe.”

The Euro saw varied movement ahead of the release, as different countries around the Euro-zone both disappointed and beat PMI expectations. The single currency rose to about 1.3100 against the US Dollar, following better than expected Spain PMI. Those gains were soon erased by a disappointing Italy PMI. The revisions higher in French and German PMI’s had no significant effect on trading. EUR/USD is currently trading around 1.3065, and the pair may continue to find support at 1.3038, by the 38.2% Fibonacci retracement of the pair’s rally from its all time low to its all time high.