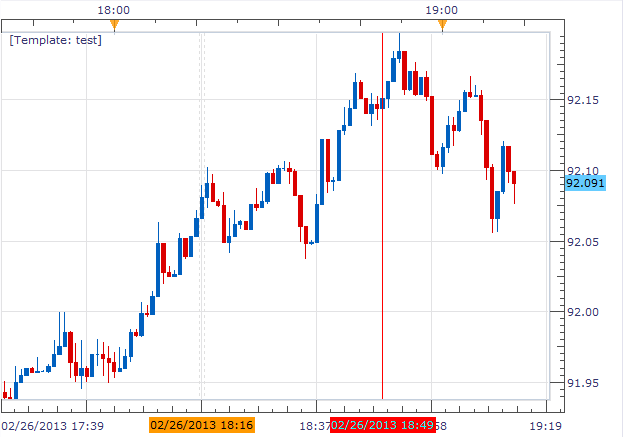 The USD/JPY was little changed on Japan’s retail trade, which posted a -1.1percent (YoY) decrease in January, compared to a downwardly revised 0.3 (YoY) percent increase in December. The figure came in slightly above expectation set for -1.5 percent. Monthly percentage changes of total store sales fell back into negative territory after showing an increase for two months.

On year, large retailers’ sales posted a -3.5 percent decrease in January, versus an upwardly revised 0.1% increase in previous year. In particular, sales in supermarket showed a -4.4 percent (MoM) decrease in January while department stores posted a 2.1 percent (MoM) increase in January. The data shows that Japanese consumers are more inclined to shop in department stores than in supermarkets. Nonetheless, the decision on the next BoJ Governor that is expected to release later this week and a rebound in Japanese equity market may boost consumer confidence.

Despite the much anticipated long-term weakness in the yen, risk aversion from the Eurozone, sequester debate in the US and possible abated short yen bets may provide more upside potential for the yen in a short period of time. Therefore, FX traders should pay close attention to market’s interpretation on BoJ’s events in the coming months, as expectation has sent the yen 20 percent lower against the dollar since November.

In yesterday’s US session, the Italian election gridlock drove capital flows out of the equity market to safe haven assets, in which the USD/JPY initially slid to as low as 90.841 but rose higher to close at 91.805. The 392-pips intraday movement signals that risk aversion may have limited effect on the yen as traders may consider US Treasury and gold as better safe haven in the near term, in which gold has pierced above 1600 today. Moreover, the immense volatility may suggest that speculators are betting on a reversal on the USD/JPY.

The USD/JPY was little changed on the retail trade report as it did not change market’s expectation on monetary easing and the next BoJ Governor decision. The currency pair is trading at 92.091 at the time of writing.

New to FX? Register for this free 20 minute course HERE and learn common FX terms like leverage and how to implement conservative trading strategies.