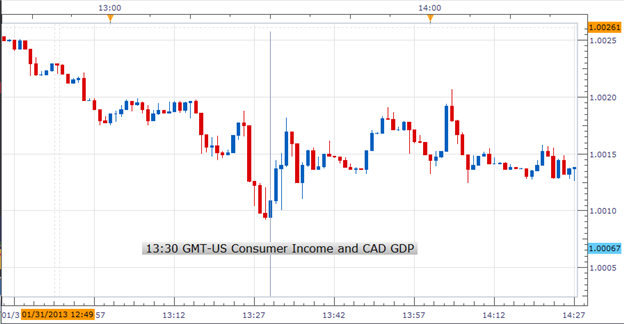 Forex: US Consumer Income Grew By the Most in Eight Years; USD/CAD Bullish

THE TAKEAWAY: [US Consumer Income surged by the most in eight years; Canadian economic grew more than expected in November] > [Wages and salaries for Americans increased before payroll tax raise; Most major industrial sectors gains in Canada.] > [USD/CAD Bullish]

Consumer Income in the US rose by 2.6 percent in December, the most gain since December 2004 as wages and salaries for Americans continue to grow according to a report released by Commerce Department today. The reading exceeds median forecast from a survey of economists pulled by Bloomberg News that called for an increase of only 0.8 percent. In specific, disposal income increased 2.8 percent, the biggest since May 2008. As a consequence, Consumer spending climbed by 0.2 percent in December following a rise of 0.4 percent last month.

The surge in consumer income was result from improving wages and salaries for Americans. Some companies also paid dividends and employee bonuses earlier than usual before the raise of tax rates. In the 4Q GDP report released yesterday, personal consumption, increased 2.2 percent and beat the consensus estimate. The better-than expected person income and consumption figures add more signs that the US economy is recovering. The increased payroll tax starting from 2013, however, may hurt consumer confidence to some extent.

According to a report released by Statistics Canada today, the Canadian economy grew at a faster pace than expected in November. Real gross domestic product increased 0.3 percent following a 0.1 percent rise in October. The median forecast of economists polled by Bloomberg News called for a 0.2 percent gain. On a yearly basis, GDP grew 1.3 percent in November, falling short of expectations for an increase of 1.4 percent. Manufacturing and mining, quarrying and oil and gas extraction sectors in Canada all expanded in November, leading to the gain in gross domestic product.

In the minutes following the release of the reports from US and Canada, the Canadian dollar weakened slightly against the U.S. dollar but then saw retracement to previous level. At the time of this report was written, the loonie traded lower, with the USD/CAD pair trading at C$1.0007.