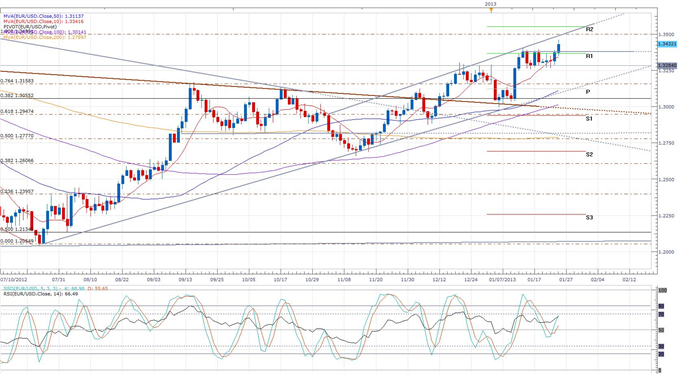 The Euro saw a strong rally in today’s session, as the European Central Bank announced that banks will repay 137.2 billion Euros of the LTRO 3-year loan. The first early repayment of the ECB’s 1-trillion Euro loan will take place on January 30, and the repayment amount far exceeded the expected 84 billion Euros of loan repayment. The early loan repayment can be seen as an indicator of the health of Euro-area banks, but many analysts warned not to read too much into the numbers.

ECB President Draghi spoke at the Davos World Economic Forum earlier today, where he said that 2012 was the year the Euro was re-launched. However, Draghi also said that fiscal consolidation is unavoidable, and there is a need to figure out how to mitigate the contractor effects of the consolidation. Finally, Draghi repeated his prediction that the Euro-area will return to growth later in 2013. Draghi’s optimism seemed to be mirrored by the results of the IFO German survey of expectations, which showed a positive result for the first time in eight months.

The biggest release of the day was the worse than expected drop in UK GDP during the fourth quarter. Following the release, the Pound dropped fifty points against the US Dollar in Forex markets, thereby erasing all earlier gains.

PM Cameron’s announcement of a referendum on UK membership in the European Union continues to draw fire in today’s session. Last night, former BoE member Posen said it’s madness to wait years for the referendum because of the economic uncertainty felt by investors. European Commissioner Rehn said today that the threat of a UK exit is creating uncertainty.

The Euro rose 100 points against the US Dollar over the European session and set a new 11-month high, as the rally may have been due to the anticipation of the LTRO numbers. EURUSD continues to trade slightly below 1.3450 at the time of this writing. Resistance might now be seen by a 1-year high near 1.3500, and support could be provided by a previous resistance around 1.3400.