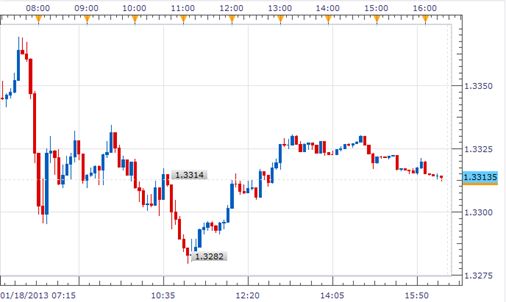 The Euro fell following two IMF reports revealing the tenuous state of the Greek recovery and Portugal’s attempts at austerity. The Greek economic review, released at approximately 15:30 GMT, came on the heels of a €3.24B loan installment approved on Wednesday and highlights the country’s continuing struggles. Greek GDP is expected to shrink 4.2% during this year alone and economists estimate that the country will face a financial shortfall of between €5.5 billion and €9.5 billion in 2015 and 2016. Aside from insolvency, the IMF report also mentioned political instability as a major threat to Greece’s salvation. Although the country’s financial situation appears dire, the IMF remains committed to the nation’s recovery, fearing a Greek exit from the EU and loss of the Euro currency.

The IMF’s Portugal Staff report, released two hours later, was less dismal in its review, claiming that the country’s austerity measures were broadly on track, with Portugal potentially returning to the bond markets in late 2013. Should Portugal begin selling new bonds again, it would be able to exit its three year, €78 billion bailout program, scheduled for next year. Nonetheless, significant threats to the nation’s recovery remain with unemployment above 16% and a budget deficit over €5.2 billion.

Investors appeared unconcerned, at least in the short time, with the IMF reports. The EUR/USD fell approximately 22 pips from 1.3314 to 1.3282 following the Greek report, but recovered rapidly and stood down 0.44% on the day. The IMF’s statements, however, point to continual EU instability, which threatens the Euro and may lead to major price depreciation should Greece, Portugal, and other troubled EU nations fail to find economic stability.