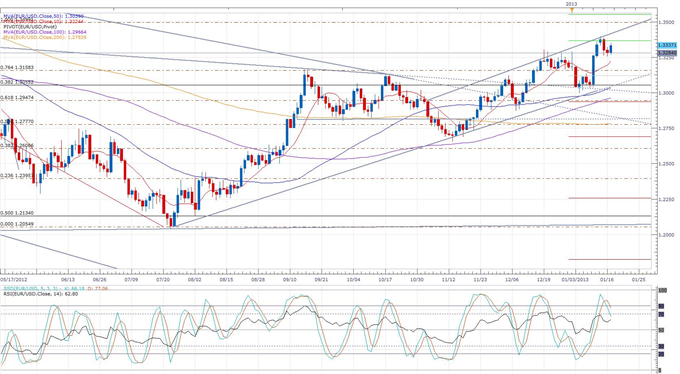 The European Central Bank’s monthly bulletin said the Euro-zone economy will begin a gradual recovery later in 2013, and inflation is expected to fall below 2% this year. However, the ECB further said that risks to the economy remain to the downside.

The economy is expected to recover because of the accommodative monetary policy and significantly improved financial market confidence, and reduced fragmentation. The ECB said further weakness is expected to extend into this year before the recovery begins. The central bank also expects foreign demand to support export growth.

The report further reported that inflation is expected to fall in line with the ECB’s target of keeping inflation below but close to 2%.

The Euro-zone economy contracted in both Q2 and Q3 of 2012 and focus is now turned to the GDP result for Q4. Furthermore, inflation fell to 2.2% in December, and lower inflation makes it easier for the ECB to decide to take further monetary actions. Any signs of improvement in the Euro-zone economy would be Euro positive.

However, the Euro did not significantly react to the optimistic ECB bulletin and continued to trade slightly below 1.3350 against the US Dollar in Forex markets. EURUSD saw a small rally earlier in the European session, following Economy Minister Roesler’s comments that Germany won’t accept a weakening Euro and will pay the price to save the single currency. EURUSD may now see resistance at 1.3404, by a ten-month high set in recent trading. Support could be provided by a broken resistance line around 1.3284.