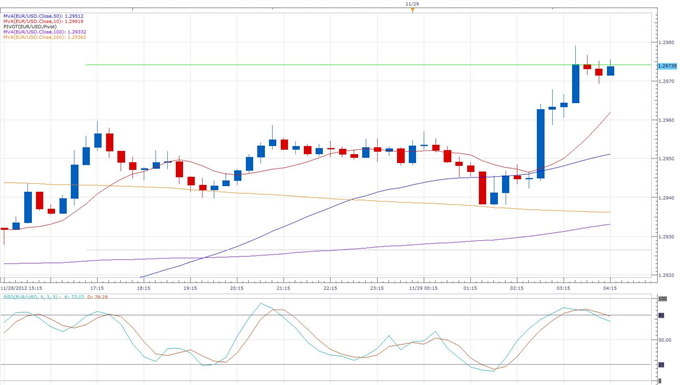 THE TAKEAWAY: German unemployment only rises by 5,000 in November -> Eighth straight month of a rise in unemployment -> Euro trading steady

The amount of people looking for work in Germany only rose by 5 thousand in November, coming down from a 6-month high of 19 thousand more people out of work in October. The monthly change in unemployment was also better than expectations for a rise of 16 thousand people looking for work. The unemployment rate (seasonally adjusted) remained at 6.9%, according to the Federal Labor Agency.

November marked the eighth straight month to see a rise in the total number of people unemployed in Germany. The German economy has been struggling under the pressure of the Euro debt crisis and the country’s gross domestic product only grew 0.2% in Q3.

Despite the better than expected unemployment numbers in the Euro-zone’s biggest economy, the Euro did not significantly react in trading in forex markets. EURUSD continues to trade about 25 points lower than the key 1.3000 line, where the pair might find resistance, and support could be provided by the previous support around 1.2824.