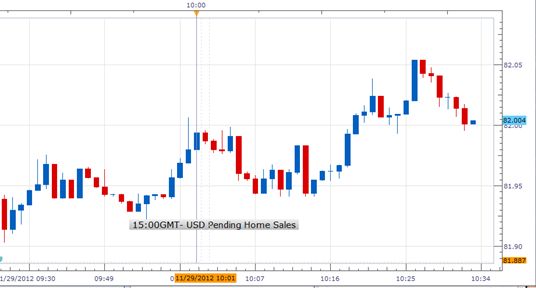 THE TAKEAWAY: [US Pending Home Sales climbs more than expected in October] > [Adds to signs of recovery in the U.S. housing market] > [USD/JPY Neutral]

The number of signed contracts to purchase previously owned homes in the U.S. increased more than economists forecasted in October, adding to signs that U.S. housing market is picking up. The National Association of Realtors reported today that its pending home sales index, a forward-looking indicator based on contract signings, increased 5.2 percent in October from a month earlier, following a 0.4 percent rise in September that was upwardly revised from 0.3 percent initially reported. The median forecast of economists surveyed by Bloomberg News had projected a 1.0 percent increase. On a yearly basis, pending home sales soared 18.0 percent in October, the largest yearly gain since November 2009, beating expectations for an 8.9 percent increase.

Given lowest mortgage rates on record and stable prices, the U.S. housing sector is picking up over the past month. House owners show greater confidence as it is more likely to put their houses with a favorable price on the real estate market.

The U.S. dollar rose slightly against the Japanese yen following data release. As can be seen from the one-minute chart above, the USD/JPY pair increased to 81.99 yen in the minute preceding the report. At the time this report was written, the USD/JPY pair was trading at 82.00 yen.