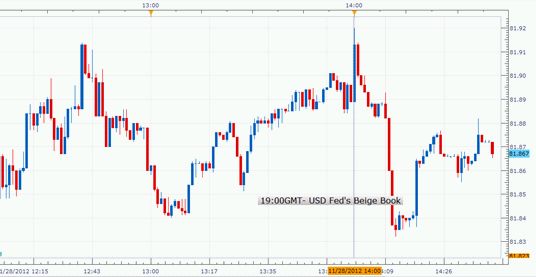 The latest Federal Reserve Beige Book, which was released today, revealed that the U.S. economy “expanded at a measured pace” across all twelve Fed, with seven of districts citing growth at a modest pace. However, because of Hurricane Sandy, New York and two other districts reported weaker conditions in October and November.

Most of the Fed’s twelve regional banks indicated an improvement in consumer spending, while manufacturing softened due to seven districts under contraction. Residential and commercial real estate was reported to gain slightly in general. In transportation, reports were mixed as hurricane Sandy slowed shipments in some districts.

On the labor market, employment conditions were modest improved in most districts while wage pressure remained ‘subdued’ over the board. In addition, almost every district described price growth as modest despite of occasionally examples with higher price growth in raw materials.

This latest edition follows the release of the Fed’s November monetary policy meeting minutes last week. The minutes revealed that many members saw economic outlook as little changed since their September decision and favored more quantitative easing since operation twist is due to expire next month.

The U.S. dollar strengthened against most its major currency counterparts in the minute after the release of the Fed Beige Book. As can be seen from one-minute chart above, the USD/JPY pair rose to 81.91 yen from 81.88 yen in the minutes preceding the report. At the time this report was written, the USD/JPY pair was trading at 81.86 yen.