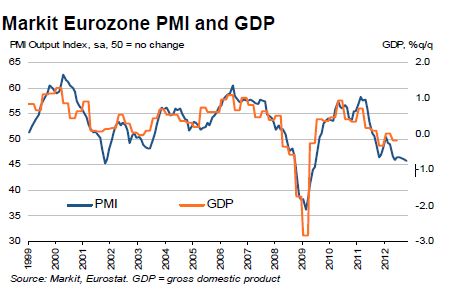 THE TAKEAWAY: The Euro may recover further as November’s flash PMI data hints at a possible turnaround after nine consecutive months of deterioration.

What’s Coming Out and When?

The Euro may find fuel for another push higher as November's preliminary set of Eurozone PMI figures comes across the wires. October's flash Eurozone composite reading of 45.7 revealed the ninth straight month of contraction in manufacturing- and service-sector activity. Expectations point to a slight recovery to a reading at 45.9 in November.

What Could the Flash PMI Releases Mean for the Euro?

This is a particularly important release as an improvement in November may signal that the prolonged contraction in the Eurozone has reached a turning point. Forex traders have viewed poor economic performance in the region as the major hurdle to a more robust recovery in global growth, meaning a better-than-expected outcome has scope to boost risk appetite and the Euro.

Why is the Flash PMI Data Important?

Eurozone PMI figures offer investors a timely indication of economic growth trends. Indeed, Eurozone PMI figures have closely tracked the trend in quarterly GDP growth in the currency bloc. Readings below 50 represent contracting economic activity while those above 50 point to an expansion.

What are the Charts Telling Us?

EURUSD took out resistance at a falling trend line set from mid-October to challenge the top of a rising channel established from the November 13 low (now at 1.2851). This is reinforced by horizontal barriers in the 1.2875-90 area. A break above the latter mark broadly exposes the 1.30 figure and 1.3012. Trend line resistance-turned-support is now at 1.2807, with a drop below that aiming for the channel bottom at 1.2749.