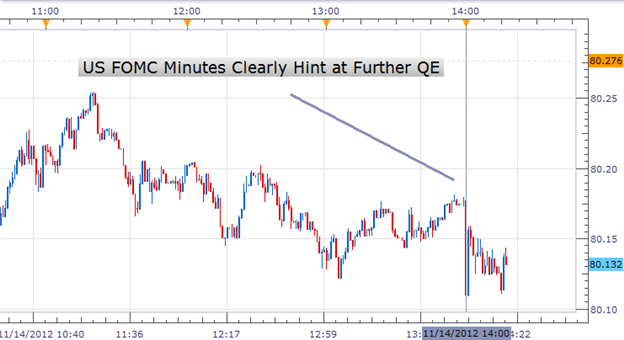 Forex: US FOMC Minutes Hint Towards QE, Put US Dollar Forecast at Risk

Minutes from the US Federal Open Market Committee meeting sent the US Dollar (ticker: USDOLLAR) lower as explicit hints towards further Quantitative Easing remains a key threat to the US currency.

The FOMC left monetary policy unchanged through their October meeting, but the minutes from that decision indicate that many members favored more Quantitative Easing as the key “Operation Twist” measure is due to expire next month.

The official minutes indicated that FOMC members saw economic outlook as “little changed” since their September decision—the meeting at which they announced indefinite monetary policy easing. Indeed, the FOMC views that domestic inflation would stay at or below their 2 percent target. Risks to growth remain clear as the so-called US Fiscal Cliff and ongoing European debt crises may weigh on the global economy.

Fed officials clearly stated their intentions for future monetary policy as they said, “The Committee judged that continuing both the purchase of MBS … and the existing [Operation Twist] to extend the average maturity of Treasury security holdings remained appropriate.” Given that Operation Twist is due to end next month, it seems quite certain that the FOMC will enact new easing measures to offset its expiration.

The effects on the US Dollar were quite clear as it tumbled immediately following the clear hints towards further Quantitative Easing.

The post-FOMC decline in the Dow Jones FXCM Dollar Index likewise put a damper on our bullish USDOLLAR Forecast.