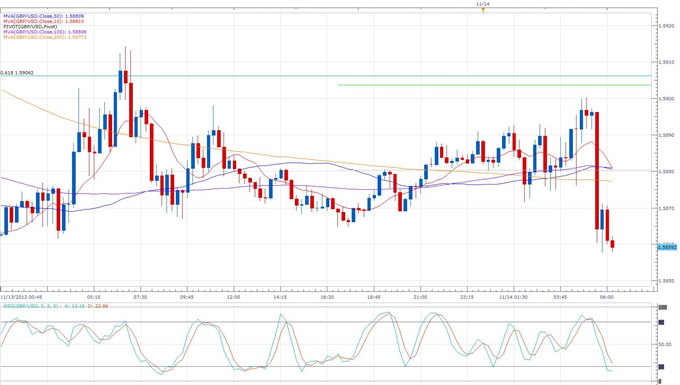 The Bank of England cut its outlook for the UK economy in its monthly inflation report, as it says the Euro crisis has had a bigger impact than initially thought. The central bank sees inflation slowing to their target 2% over the target period. The bank predicted a small decline in the fourth quarter and higher consumer prices in the short term. The inflation report also mentioned that a strong British Pound is undermining UK competitiveness.

Following the release of the inflation report, Governor Mervyn King said that the reason the Monetary Policy Committee did not add to its asset purchase target in the most recent meeting is because of higher inflation. King added that the committee is still open to further quantitative easing and has not lost faith in QE as a policy instrument. Regarding economic growth, King said the rise in Q3 GDP was due to one time factors, and economic growth will continue in a zig zag pattern. He called the combination of rising inflation and lower growth ‘unappealing’. King also said that the BoE is optimistic about the effect of the Funding for Lending Scheme.

Earlier today, the jobless claims change for October was reported as rising by 10,100, and yesterday, UK inflation was reported at 2.7% in October. The data shows a continued situation of poor economic performance and higher inflation, as was described by King.

Due to the combination of a worse BoE economic outlook and talk of further QE, the Sterling erased earlier gains and set a new daily low in currency markets. GBPUSD is currently trading slightly above 1.5850, where it could find support by a 5-month rising trend line. Resistance could be provided by the key 1.5900 figure.