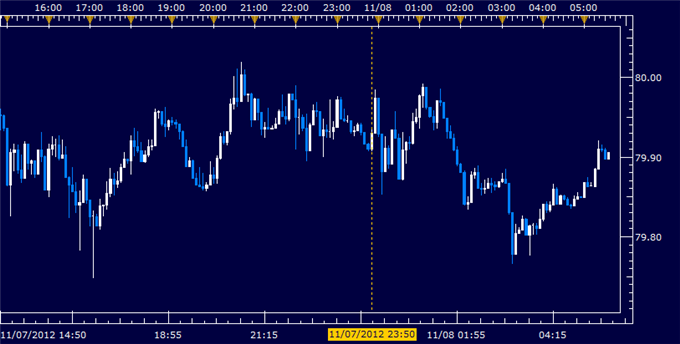 There has been little impact on the USD/JPY following the release of worse-than-expected Japanese machine orders and trade balance figures for September. Machine orders fell a further 4.3% month on month reflecting the 2nd consecutive month of declines for the figure and a reading more negative than the expected 2.1% decrease. Trade balance figures revealed that the trade deficit had narrowed from -644.5B Yen in August to -471.3B Yen for September however the reading was worse than the forecast -416.9B Yen.

What do these figures mean for Japan and the Yen?

A breakdown of the trade balance figures reveals that Japanese exports fell 10.5% in September compared with 12 months prior while imports rose 4.5% over the same period. Japanese trade has suffered significantly in 2012 due to weak global growth with exports to Europe and China having dropped significantly as demand there continues to weaken. Japanese exports to China have also continued to suffer in part due to continued tensions over the disputed ownership of an archipelago in the East China Sea.

The worse-than-expected reads on both pieces of data may give the Bank of Japan (BOJ) further support to conduct additional monetary stimulus which should cause the Yen to fall against the US Dollar. However we have seen broader Yen support following the flight to safe-haven assets in the wake of the re-election of US President Obama as forex traders turn their eyes to the“fiscal cliff” fiasco.

Understanding How to Interpret Trade Balance and Machine Order Readings

Trade balance figures represent the value of exports less than the value of imports. A negative figure reflects that imports are greater than exports for the period. Machine orders reflect Japanese manufacturers’ demand for capital equipment. These figures act as an important indication of the strength of the Japanese economy, which is highly dependent on exports for growth. As such the figures carry some weight in influencing the actions of the Bank of Japan and further monetary easing.