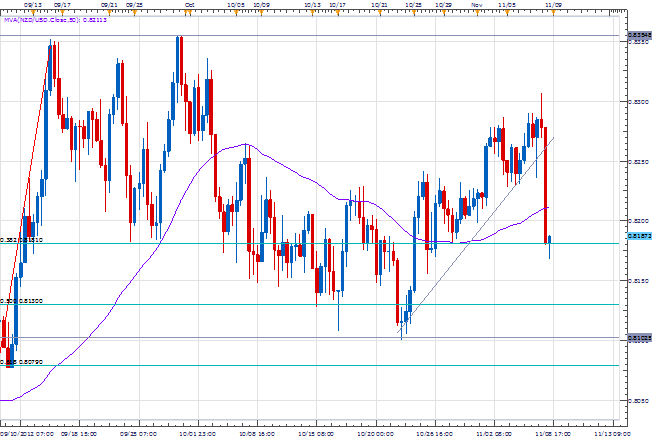 The NZDUSD has fallen 80 pips to 0.8180 following the announcement of worse-than-expected NZ unemployment figures for the September quarter. Unemployment in New Zealand rose to 7.3% which is significantly higher than the 6.7% expected and a rise from the 6.8% rate reported for the June quarter. The NZD also had a large fall against the Aussie dollar following the announcement with the AUDNZD trading at 1.2720.

The jobless rate of 7.3% is the highest seen in New Zealand since 1999. The RBNZ had noted previously that they had not witnessed enough evidence to provoke further monetary stimulus. This latest data release may provide the impetus for the RBNZ to undertake further rate cuts which would be bearish for the kiwi. Markets were previously pricing in a 22 percent of a 25 bp cut at the next meeting and the 12-month rate forecast is projected to shave off 15 bps - indicating debate as to whether another cut is in the works.

Explanation of the Figures - Connecting the Dots

The NZDUSD has been strongly supported over the course of 2012 as investors seek to invest their funds in strengthening economies amidst weaker global growth. Part of the attraction of the NZD has been the higher yield afforded by an official cash rate. However, with the RBNZ currently debating its direction with the benchmark already set at a record low 2.50 percent, that appeal could be disrupted further.

Risk assets had been trading broadly lower before the unemployment announcement following the re-election of President Obama in the US with the S&P 500 down 2.37 percent at close of trading in NY. Following the election results focus has been renewed on the imposing US fiscal cliff. The fiscal cliff comprises of $607 billion (USD) in tax increases and spending cuts set to come into effect January 1st. Investors fear that the fiscal cliff will negatively impact future growth of the US economy with the Congressional Budget Office stating the US economy would slow by as much as 0.5 percent in 2013 if the measures come into place.

The move lower for the NZDUSD represents a break of the upward trend represented in the chart below and may provide the case for a more bearish outlook on the pair. Shorter term support sits at 0.8180 the 0.382 retracement level from the September rally. Resistance remains at the September high of 0.8350. This most recent Support for the NZDUSD on a daily chart rests at the October low of 0.8100.