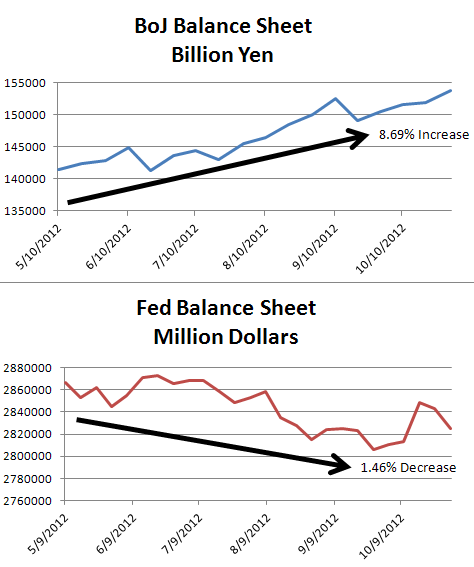 The U.S. dollar traded slightly higher versus the Japanese yen as the monetary base – the amount of money in circulation plus deposits at the BoJ – increased by 10.8 percent in October highlighting the central bank’s efforts to stimulate the Japanese economy while attempting to reach a one percent inflation target. During the monetary policy meeting on October 30, the Bank of Japan decided to increase its stimulus efforts by introducing an additional 11 trillion yen in asset purchases effectively increasing the bank’s balance sheet and pumping more money into the financial system with currency devaluation as one of the primary objectives.

The BoJ Minutes of the Monetary Policy Meeting on October 4 and 5 were released today mentioning policy official’s concerns the economy was “leveling off” and exports and industrial production had been “relatively weak”. One member noted it might be necessary to “exert influence on foreign exchange rates” when trying to find alternative ways to boost inflation.

Forex market participants likely interpret the 11 trillion yen ($137 billion) of additional money in the economy as yen dilutive potentially exerting downward pressure on the currency. When compared with the Federal Reserve’s easing operations, which includes $40 billion a month in security purchases, the Fed’s balance sheet is shrinking, suggesting more securities are maturing or sold than what’s being added as shown on the chart below. On the surface, the announcement of QE3 may appear as dollar dilutive, however when taking a closer look at the net inflow of stimulus into the U.S. economy (as measured by changes in the balance sheet) it seems as if dollar debasement is not as likely as is the case with the yen.