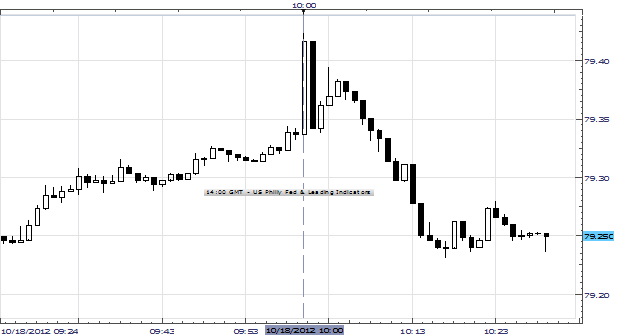 THE TAKEAWAY: US Philadelphia Fed Index positive for first time since April; Leading Indicators rose by most in seven months > Manufacturing and housing sectors pick up, but labor market still struggles > USDJPY bearish

Factory activity in the Philadelphia region expanded in October for the first time since April, suggesting that the manufacturing sector may be stabilizing. The Federal Reserve Bank of Philadelphia’s business activity index came in at 5.7 in October after registering -1.9 the previous month, topping economist expectations for a reading of 1.0. A reading below zero signals below-trend factory growth.

The Philadelphia Fed’s Business Outlook Survey is released monthly, and covers business confidence of manufacturers in eastern Pennsylvania, southern New Jersey and Delaware. The forward-looking index is viewed as one of the first monthly indicators leading up to the ISM Manufacturing report.

Separately, the index of U.S. leading economic indicators rebounded in September, rising by the most in seven months as recovery of the residential housing market gained momentum. The Conference Board’s gauge of the outlook for the next three to six months climbed 0.6 percent in September after a downwardly revised 0.4 percent decline the previous month. The median forecast of 52 economists surveyed by Bloomberg News had called for a 0.2 percent rise.

The improvement in economic outlook was led by a jump in home-building permits and a surge in stock prices, with the sub-indexes advancing 0.30 percent and 0.11 percent respectively. The improvement in permits falls in line with a report released jointly yesterday by the U.S. Consensus Bureau and the Department of Housing and Urban Development, which showed that building permits climbed in September to its fastest annual rate in over four years.

After initially surging against the Japanese yen, the U.S. dollar quickly erased its gains and fell to as low as 79.23 yen. At the time this report was written, the USDJPY pair was still trading lower at 79.25 yen.