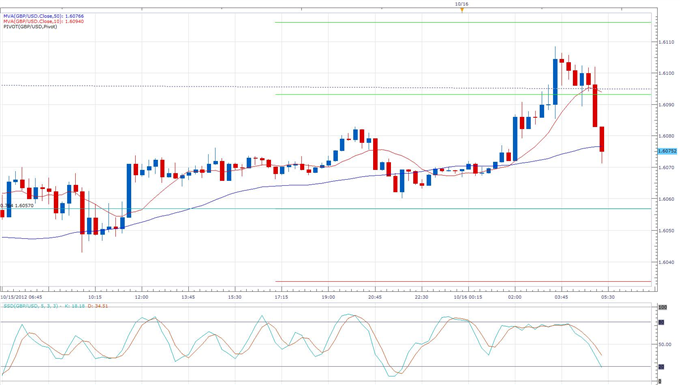 The British Pound declined as UK annual inflation was reported to have fallen to a near 3-year low. The consumer price index for September was 2.2% lower than September 2011, as the inflation rate was as expected and down from August’s 2.5% rate. On a monthly basis, consumer prices rose 0.4% in September, according to the UK Office for National Statistics.

Majority of the change in prices came from the housing and household sector, specifically caused by a drop in prices of utility bills. There was upward pressure on prices from transport, predominantly from motor fuels. The retail price index annual inflation fell to 2.6% in September, from 2.9% in August.

UK producer prices rose a bit more than expected in August, as the PPI for output rose by 0.3% in September (non seasonally adjusted). Economists expected only a 0.1% rise in output producer prices.

The Bank of England maintains a 2% inflation target, and any rise in annual inflation above 2% could be considered an argument against the BoE providing further monetary stimulus in their next monthly meeting. Therefore, the dropping UK inflation, combined with a weak UK economy, could possibly add to arguments for additional quantitative easing in the November meeting, and was therefore Sterling negative.

That’s why the British Pound dropped below the key 1.6100 level against the US Dollar following the CPI release. The Pound rose above 1.6100 earlier today for the first time since October 8, following a rise in risk sentiment that was caused by developments in the Euro-zone. Support could now be provided for $GBPUSD by the key 1.600 figure.