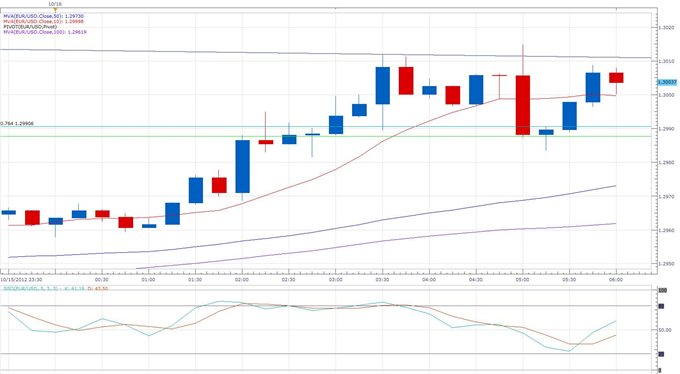 THE TAKEAWAY: Euro-zone inflation revised to 2.6% in September -> ZEW survey for current situation in Germany falls to a 3-year low -> Euro erases some earlier gains

The Euro dropped below a key figure against the US Dollar, as the Euro-zone annual inflation was reported as lower than previously estimated for September. Consumer prices were 2.6% higherr in September 2012 than September 2011; the price change was lower than a previous estimate for 2.7% and steady with August’s 2.6% rate. Consumer prices were 0.7% higher than August 2012, according to Eurostat.

Greece saw the lowest annual inflation rate at 0.3%, Estonia saw the highest inflation at 4.1%. Clothing prices rose 14% in the Euro-zone in September, as recreation costs fell 1%.

The slightly lower than previously estimated inflation had a negative effect on the Euro, as a lower inflation gives the ECB more leeway to cut interest rates, which is Euro negative. However, ECB President Draghi has recently said that the central bank’s OMT plan would be more effective for struggling economies than another rate cut, possibly implying that the central bank will be looking to implement the bond purchasing plan before cutting rates again.

Also released today, the German ZEW survey for current situation reached a new 3 year low in October. The survey was reported at 10.0, which was lower than the expected 11.8 survey result. However, the survey of economic sentiment beat expectations at -11.5. The Euro-zone ZEW survey for economic sentiment rose to -1.4 from last month’s -3.8 survey result.

EURUSD dropped below the key 1.300 line following the release of the revised CPI. Support might now be provided by the key 1.2900 figure. A month-long declining trend line could provide resistance around 1.3014.