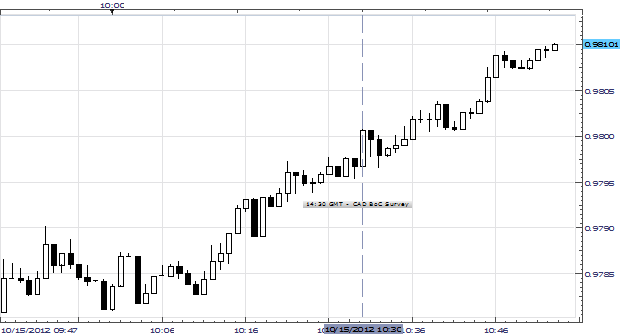 The Bank of Canada’s quarterly survey of executives indicated a continued easing in overall business-lending conditions in Canada during the third quarter of 2012. The survey’s balance of opinion fell to negative 15.8 in the third quarter from negative 10.8 the quarter prior, and marks the twelfth quarter of easing credit terms. The median forecast of economists surveyed by Bloomberg News had called for a decline to negative 12.0.

The survey collects information on the business-lending practices of Canadian financial institutions, and in particular, gathers the perspectives of respondents on price and non-price terms of business lending. Readings above zero indicate tightening credit terms while figures below zero signal easing conditions.

Responses to the survey revealed that both price and non-price lending conditions had continued to ease across all borrower categories, most notably for corporate borrowers and small businesses, which saw easing conditions for the thirteenth and eighth straight quarters, respectively. Competition among lenders and from capital markets was considered the underlying factor in the easier conditions. Meanwhile, demand for credit from financial institutions was “modestly positive” during the third quarter.

The Canadian dollar continued to decline against the U.S. dollar after the survey results were released. A separate survey published at the same time also weighed on the loonie, as the report showed that Canadian businesses had curtailed their expectations for sales growth, investment and hiring over the next year. At the time this report was written, the USDCAD pair was trading at C$0.9810.